England vs Australia 1st Ashes Test 2019: Stuart Broad Warns Visitors Ahead of the Opener, Says Edgbaston Will Be Tasty

The fans are eagerly waiting for the start of Ashes 2019 on August 1, 2019, at the Edgbaston Cricket Ground. Ahead of the game, England’s Stuart Broad has fired a warning to the Australia team which could encounter a hostile reception from the crowds. 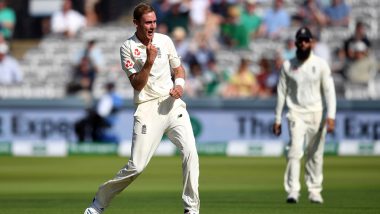 The fans are eagerly waiting for the start of Ashes 2019 on August 1, 2019, at the Edgbaston Cricket Ground. Ahead of the game, England’s Stuart Broad has fired a warning to the Australia team which could encounter a hostile reception from the crowds. Time and again, during the CWC 2019, there have been many incidents where the Australian duo David Warner and Steve Smith have been booed after the return to International cricket post the ball-tampering case. Jason Gillespie Takes a Sly Dig at Edgbaston Cricket Ground for Keeping the Scorecard of CWC Semi-Finals As Australia & England Gear Up for Ashes 2019.

According to Broad the crowd this time will be ‘tasty’ but the players are quite used to it. "Edgbaston will be tasty, won't it? I think you use it. I think they'd be wrong not to prepare and expect, certainly the Birmingham, Old Trafford and Headingley crowds to be quite lively. I think the atmosphere somewhere like Birmingham is just naturally brilliant,” he said.

Broad also mentioned that the crowd comes to the stadium to watch England. "The crowd come to see England try and win but have an amazing time with it. Look, Warner and Smith have played in front of many a big crowd and have had to warm to much abuse over their careers,” he explained.  Despite the on-field rivalry, Broad lavished praises on the duo and said that they have been punished brutally for a silly error. For the England pacer, the presence of the duo in the Ashes 2019 has only made the competition better.

Team England is riding high on confidence after their stint at the CWC 2019 and the newly crowned champions would surely want to keep up with their winning streak. On the other hand, Australia who had been ousted by the hosts will want to get back to winning ways.

(The above story first appeared on LatestLY on Jul 30, 2019 03:24 PM IST. For more news and updates on politics, world, sports, entertainment and lifestyle, log on to our website latestly.com).