Babar Azam's Pakistan is unexpectedly staring at a whitewash, after having outplayed in both the matches by a second string England side, led by Ben Stokes. England meanwhile would aim at winning this contest and bring to an end what has been a very successful series against the Asian nation. 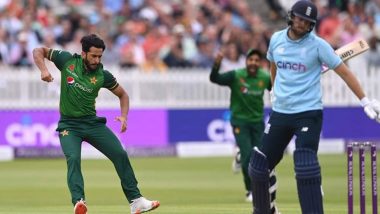 England, who have unexpectedly claimed a series win, would head into the third and final ODI against Pakistan as favourites to inflict a whitewash. Most of their first team players were sidelined due to a COVID outbreak within the team ahead of the first ODI and Ben Stokes, called in to lead a relatively inexperienced side, has done wonders. in the first two ODIs. Although Babar Azam's Pakistan looked much stronger on paper, the men in green have been absolutely outplayed in both the games and now, the 1992 world champions find themselves in a situation, where they have to use all their experience in avoiding a whitewash. England on the other hand have surprised their opponents. ENG vs PAK 2021: Shahid Afridi Urges Pakistani Cricket Team to Bounce Back Harder for the Second Game

Saqib Mahmood in particular, has dominated Pakistan's most important batsman Azam. Pakistan would want their top order to fire after having failed miserably in both their matches. For them to win against England, they would need to be sharper and play smart cricket. Here are the live streaming details for the match.

The 3rd ODI of the three-match series between England and Pakistan will be played in Edgebaston, Birmingham on July 13, 2021 (Tuesday). The match has a scheduled start time of 05:30 pm IST (Indian Standard Time).

Where To Watch for England vs Pakistan, 3rd ODI 2021 Match on TV

How To Watch England vs Pakistan, 3rd ODI 2021 Live Streaming Online in India

(The above story first appeared on LatestLY on Jul 13, 2021 03:42 PM IST. For more news and updates on politics, world, sports, entertainment and lifestyle, log on to our website latestly.com).