England vs West Indies Head-to-Head Record: Ahead of the Series Opener, Here Are Results of Last Five ENG vs WI Test Matches 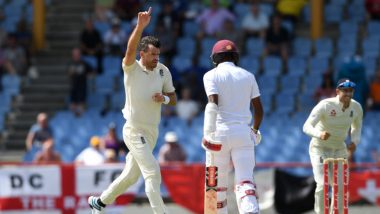 England and West Indies will kick off cricketing activities post the coronavirus enforced suspension as the two teams meet each other for a three-match Test series starting from July 8, 2020. Due to the current situation around the world, the games are set to be played inside empty stadiums, keeping in mind the health and safety of everyone involved.  So ahead of the first game of this historic series, we take a look at their head-to-head records. England vs West Indies 2020 Full Schedule: Check Fixtures, Venues & Other Details of ENG vs WI Test Series.

England and West Indies have met each other 157 times in the longest format of the game with the Caribbean side holding the upper hand with 57 victories to the Three Lions’ 49. Remaining 51 games have ended in a draw. The last five meetings between them have followed similar suit, with Windies registering three wins to England’s two. England vs West Indies Test Series 2020: Joe Root Set to Miss First Test, Ben Stokes to Captain England for First Time.

A brilliant bowling display and a Shai Hope masterclass guided West Indies to one of the most dominant wins on the English soil in their modern history. Hope registered a ton in each innings as Windies down a target of 322 runs to win the game by five wickets at Headingly.

This was one the lowest scoring game at the tour as none of the teams managed to get past the 200-run mark. Ben Stokes was the main protagonist with the bat and ball in the first innings while a seven-fer by James Anderson in the second innings, saw the hosts restrict the visitors to a below-par score. England chased down the target on 107 with nine wickets to spare.

A brilliant bowling display by the Caribbean side in the first innings saw England being bowled out for just 77 runs. Riding on Jason Holder’s double century, the hosts put forth a target of 628 runs. But the visitors weren’t up to the task as they lost the game by 381 runs.

Yet another game on the tour where the English batting lineup had no answer to the Caribbean bowling attack. The visitors were bowled out for below the score of 200 in both the innings thanks to an eight-wicket haul by Kemar Roach. With a target of 14 runs on the board, Windies chased it down without losing any wickets.

Yet another one-sided game in the series, but this time it was England who came out on top. Mark Wood and Moeen Ali’s brilliant performance gave England a first-inning lead. Joe Root registered a ton to put a target of 485 runs on the board. However, the hosts crumble in the final innings of the game as they lost by 232 runs.

(The above story first appeared on LatestLY on Jul 02, 2020 09:52 PM IST. For more news and updates on politics, world, sports, entertainment and lifestyle, log on to our website latestly.com).