England Women vs India Women One-Off Test 2021: From Mithali Raj to Katherine Brunt, 5 Players to Watch Out for During ENG-W vs IND-W at Bristol County Ground

The Indian Women's team would be taking on their English counterparts in a one-off Test match starting on Wednesday 16 June at the Bristol Cricket Ground. Both sides boast of a lot of talent and experience and it promises to be an evenly matched contest. 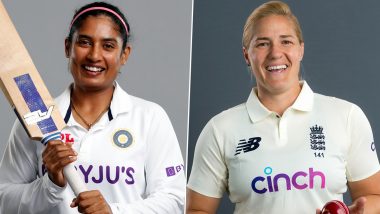 Women's Test cricket is something that doesn't take place quite often. This summer, the Indian women's cricket team, for the first time in seven years, would play against their English counterparts in a one-off Test starting from 16 June, in Bristol. The mixture of youth and experience in both sides make them equally balanced ahead of this fixture and it certainly promises to be an exciting match, something that would be remembered in women's cricket for a very long time.  Here is a list of five players to watch out for in the match: Sports News | 'Mentally Prepared' India Women's Team Look to Challenge Experienced England Outfit in One-off Test

1) Mithali Raj: When the Indian women take the field to take on their English counterparts on Wednesday, a lot of focus would be on Mithali Raj, being one of the most experienced members in the squad. The senior batswomen is the leading run-scorer in ODIs and has an equally impressive record in Tests, scoring 663 runs in 10 games at an average of 51. Although the Indian women's cricket team play Tests quite rarely, the 38-year right-hander has had a good record against England, scoring 214 against them in 2002. Her performance for the Indian team would be crucial and something to look forward to.

2) Heather Knight: The English captain is the next player in this list of the ones to watch out for. Knight carries a similar sort of experience that Raj has in the Indian team and no doubt, she would be a very important player for the hosts. She had captained England to an ODI World Cup title triumph in 2017 and also guided them to the runners-up position in the T20 World Cup in 2018. The 30-year old has played seven Tests so far, averages 32.16 with 386 runs to her name.

3) Harmanpreet Kaur: Harmanpreet Kaur is one of those players in the Indian team who has represented India across all formats of the game. She is not just Raj's deputy but her aggressive style of batting coupled with the ability to run quickly between the wickets makes her an invaluable asset to her side. Kaur is India's most capped player in T20Is, having featured in 114 matches and scoring 2186 runs. Her ODI record is also impressive--2532 runs, averaging 35.66. She has played just two Tests so far, where she scored just 26 runs but the 32-year old would be eagerly waiting to make a mark in the one-off Test clash against England.

4) Jhulan Goswami: She has been India's leader of the pace attack for a very long time now and this time too, she would once spearhead the bowling attack against England. The tall bowler has played 10 Tests, much like Raj and has scalped 40 wickets in those games at an average of 16.62. She also has had a very good record against England, capturing 29 wickets in a total of 11 innings. Goswami walks into this match with an international cricket experience of 19 years and she would undoubtedly be one of India's best bets with the ball.

5) Katherine Brunt: Katherine Brunt is the most experienced players in the England line-up. She is the leader of England's bowling attack and would pose a severe threat to the Indian team. The 35-year fast bowler has featured in 12 Test matches for England so far where she can scalped 41 wickets, her best figures being of 6/69. As a matter of fact, the right-arm bowler is just 13 wickets shy of capturing 300 international wickets. She would one of the most crucial players in Englands' plans for India.

A notable mention has to be made of youngster Shafali Verma, who has had an explosive start to her international career and was India's highest run-scorer in T20 World Cup in Australia. She is also one of the players to watch out for, especially with a strike rate of 148.31 and it would be interesting to see how she fares in Test cricket. All these players would undoubtedly play important roles for their sides in the one-off Test match and would make it a memorable one.

(The above story first appeared on LatestLY on Jun 16, 2021 11:21 AM IST. For more news and updates on politics, world, sports, entertainment and lifestyle, log on to our website latestly.com).