The term celebrappeal is amalgamation of celebration + appeal. Broad in the ongoing day-night Test at the narendra Modi cricket stadium in Motera was seen ‘celebrappealing’. However, umpire gave Shubman Gill not out. 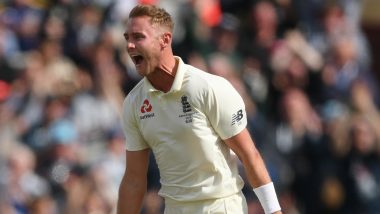 Bowlers often prematurely celebrate after dismissing a batsman. Mostly when a bowler is sure that he has trapped a batsman LBW (leg before wicket) and feels it is not required to appeal. England pacer Start Broad often does that. Whenever he is convicted that he has dismissed a batsmen he runs in celebration and appeals as well. So, the term celebrappeal is amalgamation of celebration + appeal. Broad in the ongoing day-night Test at the narendra Modi cricket stadium in Motera was seen ‘celebrappealing’. However, umpire gave Shubman Gill not out. What is Celebrappeal in Cricket?

England captain Joe Root then opted for DRS (Decision Review System) but on-field umpire’s call was retained by the third umpire. The moment Broad celebrappealed, fans took to Twitter and lashed out at the English bowler. Here are some reactions we found. Ben Stokes Warned After Accidentally Applying Saliva on Ball During IND vs ENG Pink-Ball Test, Twitter Reacts.

Oh man... Broad put Root in a horrible position with that celebrappeal. He had no choice but to review after that. That seemed leg-sidy live.

LMAO Broad calm down on your celebrappeal, umpire's given it not out 😹 #INDvENG

And there's goes Broad & his Celebrappeal

England after opting for bat first were bundled out for just 112 runs. Spinners Axar Patel and Ravi Ashwin shared nine wickets between them with the former scalping 6/38. Ashwin picked 3/26 while Ishant Sharma chipped in with a wicket. Opener Zak Crawley was the top scorer for England with 53 runs.

(The above story first appeared on LatestLY on Feb 24, 2021 09:38 PM IST. For more news and updates on politics, world, sports, entertainment and lifestyle, log on to our website latestly.com).