Despite having a terrible season for Kings XI Punjab Kings (now Punjab Kings) in IPL 2020, Maxwell ignited a bidding war between Royal Challengers Bangalore (RCB) and Chennai Super Kings (CSK), with the former team eventually earning his services for a whopping INR 14.25 crore. 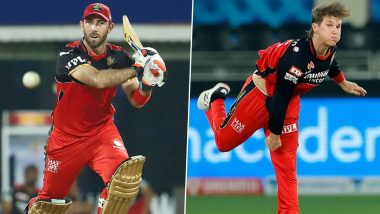 Glenn Maxwell was one of the most talked-about players in the Indian Premier League (IPL) 2021 auction earlier this year. Despite having a terrible season for Kings XI Punjab Kings (now Punjab Kings) in IPL 2020, Maxwell ignited a bidding war between Royal Challengers Bangalore (RCB) and Chennai Super Kings (CSK), with the former team eventually earning his services for a whopping INR 14.25 crore. In a recent interaction, the dashing all-rounder revealed that his Aussie teammate Adam Zampa had played a role in getting him to the RCB franchise. He demonstrated how the leg-spinner, who also plays for the Virat Kohli-led team, gave him the RCB cap one day before the auction event.  RCB, PBKS Engage in Hilarious Exchange of Words over Glenn Maxwell’s Stellar Show Against Mumbai Indians.

During the time of the auction, Maxwell and Zampa were part of the Australian team playing New Zealand in a five-match T20I series. The 32-year-old narrated Zampa took out his RCB cap and made him wear it. Moreover, the leg-spinner took a picture and sent it to Virat Kohli along with a short message.

“There’s actually a funny story. The day of the auction, it was at night time in New Zealand. We were training while in quarantine in New Zealand. Adam Zampa had his RCB hat in his bag, so he took it out and made sure we had a photo. He sent it to Virat and said ‘Let’s get it over the line. Congratulations I have already given him his first cap!” Maxwell said in a video posted on RCB’s social media page.

Maxi talks about Zampa presenting him an RCB cap in New Zealand, the role IPL has played in his career and much more in this pre-season chat for @myntra presents Bold Diaries.#PlayBold #WeAreChallengers #IPL2021 pic.twitter.com/tCpYrVgC6A

Maxwell further narrated Kohli’s epic reaction after coming across the picture. He also joked how all this would have looked had RCB’s plan of getting Maxwell didn’t work. Nevertheless, the Bangalore-based franchise eventually got the all-rounder for the cash-rich league.

“That was before the auction, so it all happened pretty well. It would have looked pretty silly if it didn’t work out that way. He put the picture on afterward, but we took the photo before the auction. Virat said you guys are idiots (after Zampa sent Virat Kohli the picture),” Maxwell added.

Meanwhile, the Aussie dasher had a memorable debut for RCB as he scored a match-winning 30 against defending champions Mumbai Indians in the season opener. However, he needs to deliver consistently to end RCB’s quest for the maiden title.

(The above story first appeared on LatestLY on Apr 13, 2021 08:42 PM IST. For more news and updates on politics, world, sports, entertainment and lifestyle, log on to our website latestly.com).