Two run-outs after a hit-wicket changed the course of Match 51 of IPL 2022 between Gujarat Titans and Mumbai Indians at the Brabourne Stadium on Friday. 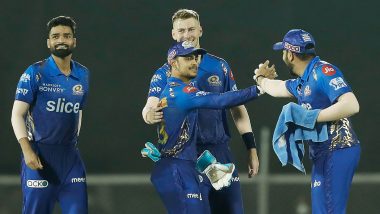 Mumbai, May 7: Two run-outs after a hit-wicket changed the course of Match 51 of IPL 2022 between Gujarat Titans and Mumbai Indians at the Brabourne Stadium on Friday. After restricting Mumbai Indians to 177/6 in 20 overs, built on vital knocks from Rohit Sharma (43), Ishan Kishan (45) and Tim David (44 not out), Gujarat Titans got off to a superb start with openers Shubman Gill and Wriddhiman Saha raising 100 runs for the opening wicket in 66 balls. GT vs MI, IPL 2022: Hardik Pandya Not Satisfied With Batting Performance of GT After Defeat Against Mumbai.

Though Gill was out for 52 runs and Saha for 55, both of them fell to leg-spinner Murugan Ashwin as Gujarat Titans reached 111/2 in the 13th over. They had laid a solid foundation from which they could cruise to victory. Gujarat Titans needed 67 off 42 deliveries with eight wickets in hand. With skipper Hardik Pandya at the crease along with Sai Sudarshan, Gujarat were in a good position to go for victory. But the match took its first turn when Sai Sudarshan was out -- getting hit-wicket off Kieran Pollard, losing his balance trying to pull a short delivery and falling on the stumps -- and back in the dugout with the score 138/3 in the 16th over.

Pandya was then run out, the first of two such incidents that sealed Gujarat Titans' fate. Pandya went for a quick single as David Miller tried to chop a ball and under-edged it behind the stumps. Keeper Ishan Kishan was off in a flash and removed the stumps with an underarm throw and Pandya was out, his bat on the crease when the ball struck the stumps. Pandya called for the run and slid his bat in an attempt to reach safety but did not dive, which could have helped his cause. The score at this juncture was 156/4 with Gujarat needing 22 runs from 14 balls -- the target still achievable with Miller and Rahul Tewatia at the crease. GT vs MI, IPL 2022: Wriddhiman Saha, Shubman Gill's Fifties Go in Vain As Mumbai Indians Beat Gujarat Titans by 5 Runs.

But Mumbai kept up the pressure with some clinical bowling as Gujarat progressed to the last over needing nine runs from six deliveries. However, there was one more twist in the tale and that occurred through another run-out, Tewatia getting out in the third ball of the 20th over as he was out going for a tight second run, after pulling a length-ball to deep midwicket. Tilak Varma ran in from the deep and threw it to Kishan who whipped off the bails in a flash, catching Tewatia on the line. Gujarat needed seven runs off the last three deliveries and Rashid Khan scored one off the fourth delivery of the over, Miller failed to connect on the last two deliveries and Gujarat Titans fell short by five runs, with Mumbai Indians turning things around with good bowling and some good work in the field. And a bit of luck too.

(The above story first appeared on LatestLY on May 07, 2022 11:05 AM IST. For more news and updates on politics, world, sports, entertainment and lifestyle, log on to our website latestly.com).