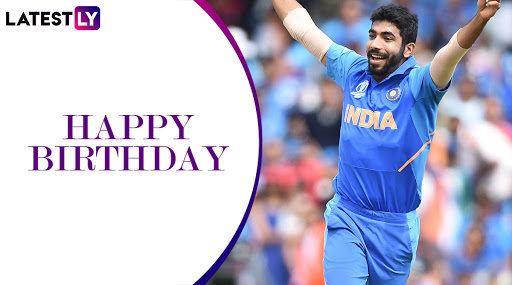 India’s pace machine Jasprit Bumrah will celebrate his 26th birthday on Friday (December 6). The pacer is one of the most lethal bowlers in world cricket right now and is also the top-ranked ODI bowler in the world. What makes Bumrah unique is his unorthodox slinging action and the ability to bowl toe-crushing Yorkers consistently with dead-accuracy. The pacer consecutively made his debut's in ODIs and Twenty20 internationals against Australia in the 2015-16 series. He is the first Indian bowler to take 5 wickets in a Test innings in South Africa, England and Australia during the same calendar year. On the occasion of his birthday, we take a look at 5 best spells by the Indian Pacer. Abdul Razzaq Trolled With Hilarious Memes After Calling Jasprit Bumrah a Baby Bowler.

Bumrah plays first-class cricket for Gujarat and made his debut against Vidarbha in October 2013 during the 2013-14 Ranji Trophy season and was the highest wicket-taker in the tournament. The pacer made his T20 debut against Maharashtra in the 2012-13 Syed Mushtaq Ali Trophy and was instrumental in their title win. A 19-year-old Bumrah grabbed attention on his IPL debut when he finished with the figures of 3/32 against RCB. While doing so, he became only the third bowler to take three wickets on his debut. The right-arm pacer made his Test debut for India against South Africa at Newlands in Cape Town on January 5, 2018. In the third test of that series, the youngster took his first five-wicket haul in Tests. Here are top 5 spells by the Indian pace machine. Jasprit Bumrah Hits the Gym As He Returns From Injury, Watch Video of Indian Pacer’s Intense Workout.

This was one of the best bowling performances in Test cricket history as Bumrah ended the match with 9 wickets but it was his spell in the first innings that made all the headlines. Aussie batsmen were no match for the Indian pacer as he ran through the top order before cleaning up the tail-enders and finished the innings with 6 wickets for 37 runs.

Indian speedster took a hat-trick against West Indies in the second test and became only the third Indian bowler to take a hat-trick in Test cricket behind Harbhajan Singh and Irfan Pathan. He dismissed Darren Bravo, Shaman Brooks and Roston Chase to complete his hat-trick. Braithwaite, Campbell and Jason Holder were his other victims in the match as he finished the innings with six wickets.

India did manage to win a Test match against the Proteas in their own backyard and Bumrah had a major role to play on that. The pacer completed his first five-wicket haul in Test in the first innings of the match. He dismissed Hashim Amla and Faf du Plessis in the same innings, signaling his abilities to take big wickets.

This was Bumrah’s first five-wicket haul in ODIs as the pacer ran through the Lankan batting line-up with relative ease. The batsmen found it difficult to deal with Bumrah as three of his five wickets were the top order batsmen including Dickwella and Thirimanne. The Indian pacer bowled with pace and got the most out of the pitch that helped seemers a bit and recorded his best figures at that time.

Same opposition in the same series and Bumrah showed his class as the pacer took four wickets to leave Sri Lanka helpless. Sri Lankan batsmen once again struggled against him and had difficulties in putting him away. The pitch offered very little to the pacers but Bumrah displayed his variations, especially the slower balls to take his wickets.

Jasprit Bumrah is currently injured but and will not take part in the limited-overs series against West Indies but is expected to make a comeback in the series against New Zealand. Jasprit Bumrah was recently named as the number one ODI bowler in the latest ICC Bowling Rankings.