On the occasion of Kumar Sangakkara's 43rd birthday, Suresh Raina, Gautam Gambhir, Mahela Jayawardene and many other prominent members of cricket fraternity extended wishes for the former Sri Lanka captain. Born in 1977, the southpaw was an elegant stroke player who proved his mettle in all formats of the game. 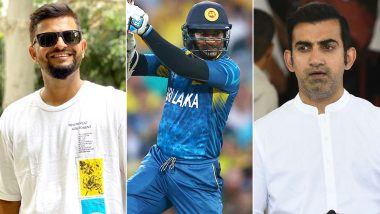 One of the finest left-handed batsmen ever, Kumar Sangakkara turns 43 on Tuesday (October 27), and wishes are pouring in for him from all around the world. On the occasion, Suresh Raina, Gautam Gambhir, Mahela Jayawardene and many other prominent members of cricket fraternity extended wishes for the former Sri Lanka captain. Born in 1977, the southpaw was an elegant stroke player who proved his mettle in all formats of the game. Be it playing a marathon knock in Test matches or scoring quick runs in T20s, Sangakkara rose to every challenge which came his way. Along with his batting prowess, the legendary cricketer was also a reliable wicket-keeper. This Day That Year: Kumar Sangakkara, Mahela Jayawardene Record Highest Partnership in Test Cricket With 624-Run.

Making his international debut in 2000, Sangakkara didn’t take long in becoming the cornerstone of Sri Lankan Cricket Team. His knack of scoring runs with a stellar consistency guided Sri Lanka to several triumphs. Leading the side, the left-handed batsman also guided his national side to the 2011 World Cup final. His tally of 28016 runs is also the second-highest for any batsman in international cricket after India’s Sachin Tendulkar. Meanwhile, let’s look at how cricket stars wished the talismanic cricketer. When Irfan Pathan Sledged Kumar Sangakkara.

Happy birthday @KumarSanga2. Wish you the healthiest & happiest times ahead. 🎂🎂🙌

Happy birthday @KumarSanga2 have a good one.. #Legend

A very happy birthday to one of the finest left handed batsman @KumarSanga2! Wishing you good health & happiness! Have a great year ahead! pic.twitter.com/fsOOsXxTR3

A very happy birthday to the legend ⁦@KumarSanga2⁩ one of the most consistent batsmen in the history of the game.all the best Keep inspiring pic.twitter.com/3gzEt6MOby

On his birthday, a look back at Kumar Sangakkara's imperious four 💯s in a row at the 2015 @cricketworldcup, which confirmed his place among the all-time ODI greats. pic.twitter.com/nOKiXkSfUe

Sangakkara bid adieu to international cricket in 2015 and gave a breather to many bowlers around the world. He went on to become MCC chairman in 2019 and has done a commendable job. Currently, he’s serving as a commentator in the ongoing Dream11 Indian Premier League (IPL) 2020 which is taking place in the United Arab Emirates (UAE).

(The above story first appeared on LatestLY on Oct 27, 2020 04:33 PM IST. For more news and updates on politics, world, sports, entertainment and lifestyle, log on to our website latestly.com).