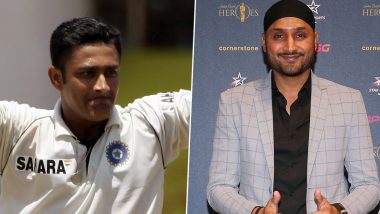 The Indian cricket team is one of the most successful sides in the history of the game and the nation has also produced many legendary cricket stars. With 34357 runs, Sachin Tendulkar is the highest run-scorer in international cricket while Kapil Dev was the first bowler to take 400 Test wickets. According to Harbhajan, however, his ex-partner in crime and former leg-spinner Anil Kumble is the greatest match-winner India has ever produced. The Punjab-born cricketer, who himself is one of the great Indian cricketers, heaped praises on Kumble and said he was lucky to have played with the talismanic leg-spinner. Harbhajan Singh Lashes Out at China, Vows to Not Endorse Chinese Products After Recent Stand-Off at Galwan Valley.

With the likes of Sunil Gavaskar, Rahul Dravid, Sachin Tendulkar and Virat Kohli going on to attain ‘legendary’ status, India has been known to produce better batsmen than bowlers. However, from the perspective of Harbhajan, Kumble is the best ever cricketer to have donned the Indian jersey. Harbhajan said that despite not being able to spin the ball a long way, Kumble showed that a spinner still can bamboozle the batsmen.

“In my view, Anil bhai was the greatest ever who played for India. He’s probably the greatest match-winner India has ever produced. People used to say he didn’t spin the ball, but he showed that if you had the heart, you could get batsmen out regardless of whether the ball spun or not,” Harbhajan told Sportstar.

With 619 wickets in Test matches and 337 wickets in ODIs, Kumble still continues to be India’s most successful bowler in history. Unlike other great spinners, the Karnataka-born cricketer didn’t spin the bowl a long way but backed his line and length to get the better of the batsmen. Along with his bowling prowess, he was also a handy batsman lower down the order and he also led Indian Test team between 2007 and 2008.

“If anyone has half the competitiveness Anil bhai had, he would become a champion. I’m lucky to have played with him for so many years. He was an unbelievably committed player,” Harbhajan added.

In the list of highest wicket-takers of all time, Kumble is placed at the third position with 956 international wickets. Harbhajan and Kumble have also played a lot of international cricket together and tormented many prominent batting line-ups.

(The above story first appeared on LatestLY on Jun 21, 2020 12:21 PM IST. For more news and updates on politics, world, sports, entertainment and lifestyle, log on to our website latestly.com).