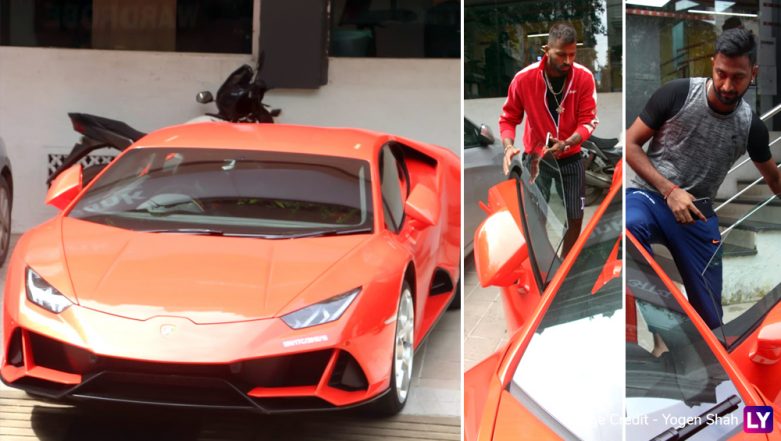 Indian Cricketers and brothers Hardik and Krunal Pandya recently bought an orange colour, Lamborghini. The pictures of Pandya brothers taking their new Lamborghini Aventador out on a drive went viral. Hardik Pandya is a star player who also plays for Mumbai Indians team in Indian Premier League (IPL). He was last seen in action at ICC Cricket World Cup, 2019.  His brother Krunal Pandya, was the part of the T20I series against West Indies, however, the junior Pandya has been rested for the ongoing India tour of West Indies. Hardik Pandya Enjoys Quality Time With Mother, the Indian All-Rounder Shares Sweet Photo With Mom on Instagram (See Pic)

Hardik Pandya also owns a stunning black Range Rover. Lamborghini is a dream car and is very sporty and trendy. The Aventador model has high tech luxury and includes a hand-finished interior. The body type is coupe which is convertible and it is two-seater car with a horsepower of 515 to 544 kW.  Hardik Pandya has been dropped from India's series against West Indies as BCCI wants him to take full rest and prepare well for the upcoming series. India recently whitewashed Windies cricket team in the ODI and T20I series. Men in Blue won both formats by 3-0. Now Indian team will play against West Indies in the two-match Test series.

Hardik and Krunal Pandya Take Their New Lamborghini For a Ride

Recently, Hardik and Krunal also shared a video on Instagram in which they were seen signing 'Why This Kolaveri Song' on the mic. Hardik Pandya was part of World Cup 2019 squad of India team. He played all the nine matches of the Indian team and scored 226 runs. He also took 10 wickets in the tournament.

Hardik Pandya and Krunal Enjoying the Drive of their New Lamborghini

Hardik Pandya shares a message on Instagram for his Elder Brother

“I smile because you’re my brother. I laugh because there’s nothing you can do about it!”😂

Hardik Pandya even named his brother Krunal as the best left-hander while replying to ICC tweets of 'Who is the best left-hander?' After Irfan and Yusuf Pathan, the Pandya brothers are the next rocking pair in Indian Cricket team and they both contribute immensely in team's victory.