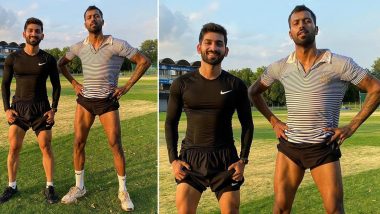 Indian all-rounder Hardik Pandya might not be able to showcase his on-field blitzes due to the COVID-19 break. However, that doesn’t stop him from leaving any stones unturned in his training. The junior Pandya has been frequently giving fitness goals to his fans with his inspiring workout photos and videos on social media. In his latest Instagram picture, the Mumbai Indians star can be seen flaunting his toned legs alongside his cousin brother Vaibhav Pandya. The all-rounder also asked his fitness-enthusiast fans not to skip the leg day during training. Father-to-be Hardik Pandya Will Have Extra Energy in IPL 2020.

“Never skip leg day,” wrote the three-time IPL winner while sharing the picture on Instagram. Fans were in awe seeing Pandya’s toned-up quadriceps as they filled the comment section with praises. In fact, the cricketer’s pregnant wife Natasa Stankovic also reacted on the pic with a fire emoticon. Meanwhile, have a look at the pic. Natasa Stankovic Flaunts Her Baby Bump in an Adorable Photoshoot With Hardik Pandya.

Well, Hardik hasn’t played an international match since September last year and must be raring to go out on the field again. In fact, former Australian spinner Brad Hogg reckons that the all-rounder, who is set to become a father for the very first time, will have extra energy when he takes the field again.

“The all-rounder Hardik Pandya. He is looking to get back into cricket after a long time off due to injury. He’s also got a baby on the way as well. I just think those things will give him extra energy and he will become man of the tournament in the UAE,” Hogg said on his Youtube Channel.

(The above story first appeared on LatestLY on Jul 28, 2020 02:55 PM IST. For more news and updates on politics, world, sports, entertainment and lifestyle, log on to our website latestly.com).