Father-to-be Hardik Pandya Will Have Extra Energy in IPL 2020, Former KKR Bowler Predicts Mumbai Indians All-Rounder Will be Man of the Tournament 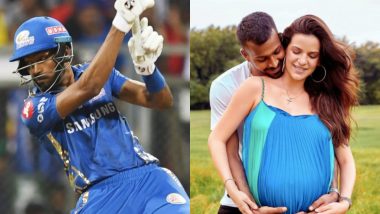 Former Australian and Kolkata Knight Riders (KKR) spinner Brad Hogg believes Mumbai Indians all-rounder Hardik Pandya will end up as player of the tournament in the upcoming Indian Premier League 2020 (IPL 2020). The former KKR bowler and cricket commentator said that Pandya is soon going to be a father and those things will give him extra energy to perform well. Natasa Stankovic Flaunts Her Baby Bump in an Adorable Photoshoot With Hardik Pandya (See Pic).

“The all-rounder Hardik Pandya. He is looking to get back into cricket after a long time off due to injury. He’s also got a baby on the way as well. I just think those things will give him extra energy and he will become man of the tournament in the UAE,” Hogg said on his Youtube Channel.

“Well, Mumbai Indians look like they are going to be champions again. They are one of my top two teams going into this year’s IPL in UAE this year. The reason for this is that they have got a good top four, they also have good all-rounders and their bowling attack is stable led by two geniuses with the new ball, and in death overs - Jasprit Bumrah and Lasith Malinga,” Hogg said.

On RCB’s chances, Hogg said: “The second team I have got for you is for RCB. Finally, they will have a big chance to take out an IPL. They have always had good stock on paper, but they have never been able to go out and get the job done. IPL 2020 Players Update: Dwayne Bravo, Andre Russell, Kieron Pollard, Sunil Narine and Other West Indies Cricketers to Miss First Few Matches of Indian Premier League Season 13 Due to CPL T20?

“Now, with inclusion of Aaron Finch at the top, he will be able to dominate in the powerplay overs, get some quick runs, and relieve the pressure in the middle order off AB de Villiers and Virat Kohli in the middle order. Also, their bowling attack looks strong with Dale Steyn and Kane Richardson, and they have a better team balance as compared to last couple of years. They will have a better strategy going into the tournament,” Hogg said.

(The above story first appeared on LatestLY on Jul 27, 2020 08:41 PM IST. For more news and updates on politics, world, sports, entertainment and lifestyle, log on to our website latestly.com).