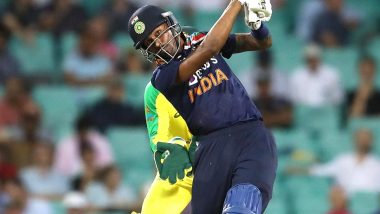 Hardik Pandya registered his highest individual ODI scored and played a wonderful knock in the India vs Australia 1st ODI match. His knock of 90 from only 76 deliveries kept India alive in the chase after the visitors had been reduced to 101/4 at one stage in their chase of 375 runs. Pandya shared a 128-run partnership for the fifth wicket with Shikhar Dhawan and kept India’s hopes alive. But he was dismissed in the 39th over by Adam Zampa and his wicket ended India’s hopes of chasing down the mammoth target. Pandya later took to Twitter to share his thoughts on the match. David Warner Ties Hardik Pandya's Shoelaces, Wins Hearts With his Sportsman Spirit Show (Watch Video).

“Not the best way to start a tour but glad to have got the chance to spend some time in the middle. Onwards and upwards,” wrote Pandya on social media after the game. He also shared two pictures of him batting in the match. Take a look at Hardik Pandya’s post.

Not the best way to start a tour but glad to have got the chance to spend some time in the middle. Onwards and upwards 💪 pic.twitter.com/JuFnvTAukV

Pandya came to the crease in the 14th over of India’s chase after Zampa had dismissed KL Rahul off a full toss. He initially took time before smashing Zampa for a straight six over long-on and starting his innings. Pandya’s knock of 90 runs comprised of four maximums and seven boundaries. He shared an important 128-run stand with Dhawan and the pair had kept the chase in control until Zampa removed Dhawan. Pandya was also eventually dismissed three overs later by Zampa with Mitchell Starc taking a comfortable catch at the long-on boundary.

Earlier, Australia, riding on centuries from captain Aaron Finch and Steve Smith, a half-century from David Warner and a fiery cameo from Glenn Maxwell posted 374/6 on the scoreboard. Finch scored 114 and shared a 156-run opening stand with Warner (69) while Smith smashed a century in just 62 deliveries. Two Indian bowlers conceded over 80 runs in their 10 overs spell with Yuzvendra Chahal, who had figures of 1/89, becoming the Indian spinner to have conceded most runs in an ODI match.

(The above story first appeared on LatestLY on Nov 27, 2020 08:20 PM IST. For more news and updates on politics, world, sports, entertainment and lifestyle, log on to our website latestly.com).