Australia batting great Allan Border termed the Windies led by Jason Holder as a 'dangerous' side for the showpiece event. 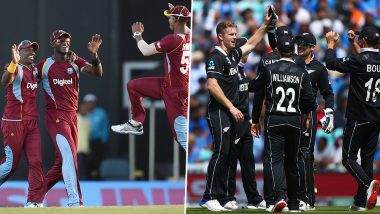 London, May 28: Experts have picked West Indies and New Zealand as the dark horses ahead of the World Cup starting here in England and Wales on Thursday. New Zealand - the 2015 World Cup runners-up - tick all the boxes, according to former Australia opener Mark Waugh. ICC Cricket World Cup 2019 Predictions: With Steve Smith, David Warner In, I Think Australia Will Win, Says Shane Warne.

"Probably New Zealand. They were in the last World Cup final. They're probably going to rely on a few players like Kane Williamson, Martin Guptill and Trent Boult but they always seem to play well," Waugh was quoted as saying by www.cricket.com.au.

"They field well, they're disciplined, they run between wickets well, they're always well coached, always in for the fight. I think they could make the semis. They're probably the dark horse," he predicted. ICC Cricket World Cup 2019 Predictions: Pakistan Can Pull Off Upset Like 1992, Says Waqar Younis.

On the West Indies, Waugh said: "The West Indies probably have the batting but not the bowling to be a threat. South Africa, I suppose, they're going to rely on Quinton de Kock, Faf du Plessis and maybe Kagiso Rabada. They'll be a threat but probably New Zealand will be a roughie." Australia batting great Allan Border termed the Windies led by Jason Holder as a "dangerous" side for the showpiece event.

"West Indies. I just think they've got a quiet little bit of confidence going on there at the moment. They've played pretty well in recent times. And Chris Gayle will be itching to potentially go out on a winning note. The grounds will suit the way he plays. They're my dark horse."

Aussie pace ace Brett Lee has put his weight behind Afghanistan, saying their star studded bowling line up led by Rashid Khan can do the trick for them in the prestigious quadrennial event.

"The dark horse would be New Zealand, but Afghanistan will play some good cricket. They probably don't have the batting that they would like but their bowling unit is outstanding."

(The above story first appeared on LatestLY on May 28, 2019 04:00 PM IST. For more news and updates on politics, world, sports, entertainment and lifestyle, log on to our website latestly.com).