With his brilliant batting in ongoing Ashes 2019, Steve Smith has reached the second spot in the latest ICC Test rankings. The Australia batsman is following Indian cricketer Virat Kohli, who is the top-ranked Test batsman. 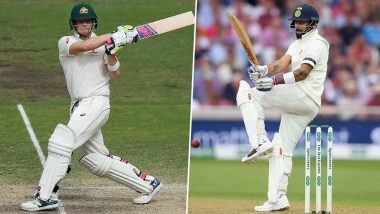 With his brilliant batting in ongoing Ashes 2019, Steve Smith has reached the second spot in the latest ICC Test rankings. The Australia batsman is following Indian cricketer Virat Kohli, who is the top-ranked Test batsman. Smith smashed two centuries in both the innings of England vs Australia 1st Test at Birmingham. In the second Test at Lord's, the right-handed batsman smashed a 92-run-knock in the first innings, before leaving the match due to an injury. Steve Smith Hopes to Be 100 % Fit for Ashes 2019 England vs Australia 3rd Test.

With the backing of his incredible show in Ashes 2019, Smith has replaced Kane Williamson from the second spot in Test rankings. The New Zealand skipper was placed on the second spot among Test batsmen before. Now, Smith is only 9 points behind Kohli. Smith has only 913 points and Kohli has 922 points. Cheteshwar Pujara is on the fourth spot is another Indian in top 10 Test batsmen.

Several Australia cricketers have also gained in their rankings in Tests due to their good performances in Ashes 2019. Travis Head jumped two spot to no. 18, while Smith's substitute in 2nd Ashes Test Marnus Labuschagne gained 16 spots to be at no. 82. Among England players, Ben Stokes advanced six spots to No.26, Jonny Bairstow jumped to No.30 and Rory Burns rose 17 spots to no. 64. Virat Kohli Completes 11 Years in International Cricket, Shares Throwback Photo and Thanks God For Blessings!

Sri Lanka captain Dimuth Karunaratne, who smashed a brilliant 122 in the first Test against New Zealand to enable Sri Lanka a victory by six wickets, jumped four spots to bag 4th spot in ICC Test Batsmen rankings. Meanwhile, some other players also lost out in Test rankings. David Warner lost four spots, Usman Khawaja and David Cameroon lost five spots each. Some major gainers among bowlers were Jofra Archer and Jack Leach. The England pacer Archer with a figure of 5/91 has broken into the top 100 bowlers with 83rd rank after his Test debut. England's spinner Leach rose eight spots to be at no.40.

(The above story first appeared on LatestLY on Aug 19, 2019 04:11 PM IST. For more news and updates on politics, world, sports, entertainment and lifestyle, log on to our website latestly.com).