Pakistan's rapid progress is no surprise to England's Lauren Winfield as the teams prepare for a crucial clash at the ongoing Women's T20 World Cup. 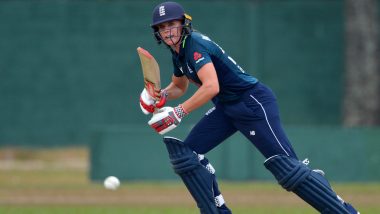 Canberra, February 27: Pakistan's rapid progress is no surprise to England's Lauren Winfield as the teams prepare for a crucial clash at the ongoing Women's T20 World Cup.

Pakistan raised eyebrows with a thumping eight-wicket win over 2016 winners West Indies on Wednesday, throwing Group B wide open and fuelling hope they can reach the knockout stages for the first time.

Winfield, part of the England side that beat Pakistan 3-0 in a series back in December, saw their resurgence first-hand in Malaysia and feels the tournament is playing into Pakistan's hands.

"They played some good cricket in that series in patches. Looking from afar, you read results, you win a series 3-0 and no-one delves into the details.

"They're a much-improved side and they played some good cricket in Malaysia.

"This tournament is giving teams with a lot of slower bowling that don't often score huge totals an opportunity, because they're on good conditions with fast outfields.

"Often when you tour the subcontinent, if they don't have a power game they find it harder. You get really good value for your shots in Australia. Those batting line-ups and those teams have come to life.

"That bodes well for a great tournament and it gives people across the board a better chance of playing good cricket."

Captain Bismah Maroof showed signs of good form in their series defeat to England, scoring 60 in the first T20I, and she shepherded Pakistan with a masterful unbeaten 38 in pursuit of 124 against Windies.

Her deputy and opener Javeria Khan, who posted an unbeaten 57 in the third and final match in December, is shouldering responsibility as a senior batter and helped set the tone with a well-made 25 on Wednesday.

Pakistan are yet to beat England in their nine meetings thus far, with this game shaping as potentially decisive for second place with South Africa looking to stretch their lead at the summit against Thailand.

(The above story first appeared on LatestLY on Feb 27, 2020 03:16 PM IST. For more news and updates on politics, world, sports, entertainment and lifestyle, log on to our website latestly.com).