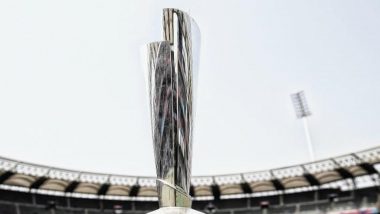 The ten participating teams have been divided into two groups of five teams each. The Group A comprises of Australia, India, New Zealand, Sri Lanka and Bangladesh while England, South Africa, West Indies, Pakistan and Thailand are in Group B. Out of the ten teams, Bangladesh and Thailand qualified from the qualifying tournament. India Squad for ICC Women’s T20 World Cup 2020 Announced, Harmanpreet to Lead 15-Member Indian Squad in Australia.

As per the format of ICC Women’s T20 World Cup 2020, top two teams from each group will progress to semi-finals. Group A topper will face the second-placed team of Group B while topper in Group B will take on a second-placed team of Group A. The semi-finals will be held at the Sydney Cricket Ground on the same day on March 05. The final of Women’s T20 World Cup 2020 will be held on March 08 at the Melbourne Cricket Ground.

(The above story first appeared on LatestLY on Feb 21, 2020 12:06 AM IST. For more news and updates on politics, world, sports, entertainment and lifestyle, log on to our website latestly.com).