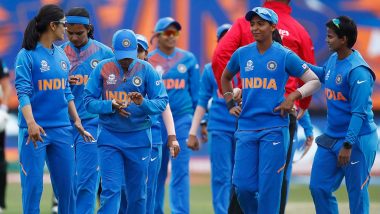 Indian Women’s team made it to the final of ICC Women’s T20 World Cup 2020 after their semi-final match against England was washed-out due to heavy rain in Sydney. The match was scheduled to take place at Sydney Cricket Ground but was called-off even before the toss could take place.  Meanwhile, this is for the first time India qualified for the finals of Women’s T20 World Cup. India finished unbeaten in Group A, winning four out of four matches and thus by virtue of finishing as group topper, the Women in Blue proceed to the summit clash. Latest ICC Women's T20I Rankings: Shafali Verma Attains Number One Spot.

India defeated hosts and defending champions Australia by 17 runs in their opening game and then registered wins against Bangladesh, New Zealand, and Sri Lanka to stay unbeaten in the group stage. As the Harmanpreet Kaur-led side qualifies for their maiden T20 World Cup final, their previous best finishes at the tournament were semi-finals appearances in 2009, 2010, and 2018.

"It is unfortunate not to get a game due to the weather. But that's how the rules go. In future, it would be nice to have a reserve day. From day one, we knew that we have to win all the games because if in case we don't get any play in the semifinals, it will be hard for us. Credit to the team, we wanted to win all the games and we did it," said Indian skipper Harmanpreet.

"Frustrating, didn't want the World Cup to end this way but not much you can do about this. Would have been good to have a reserve day perhaps. That loss to South Africa cost us. Not really, we expected to reach the semi-finals and that we did. Undone by the weather. Did feel like we had started to gain momentum in recent games and we were really ready for this semifinal," said England captain Heather Knight.

The second semi-final of the T20 World Cup 2020, which will also take place at the Sydney Cricket Ground, is scheduled between South Africa Women and Australia Women. In case, that match is washed-out as well then South Africa will go through as they finished as Group B toppers. The final will be held on Sunday, March 08 in Melbourne.

(The above story first appeared on LatestLY on Mar 05, 2020 11:18 AM IST. For more news and updates on politics, world, sports, entertainment and lifestyle, log on to our website latestly.com).