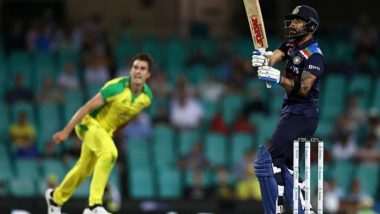 After losing the three-match ODI series by 2-0, the Indian cricket team will look to overturn their fortunes in the third game. The Indian cricket team will be looking out give their best in the match which will be held in Canberra at the Manuka Oval. The first two games were held in Sydney. The Australian cricket team has one change in the squad with the groin injury of David Warner. D’Arcy Short was the one who has replaced the Australian opener. On the other hand, T Natarajan could make a debut for the Indian team. For now, the news from the centre is that India has won the toss and elected to bat first. India vs Australia 3rd ODI 2020 Live Score Updates.

Talking about the match conditions, it was reported that the last night had offered a lot of rain and thunderstorms. This means the ball would go off the bat quite easily. However, the weather will remain ideal for the day of cricket and the temperatures would be ranging at around 20-24 degree Celcius. Rains will not obstruct the match. Which means the fans can enjoy a good day at the Manuka Oval. Now let's have  look at the playing XI of both teams below:

(The above story first appeared on LatestLY on Dec 02, 2020 08:45 AM IST. For more news and updates on politics, world, sports, entertainment and lifestyle, log on to our website latestly.com).