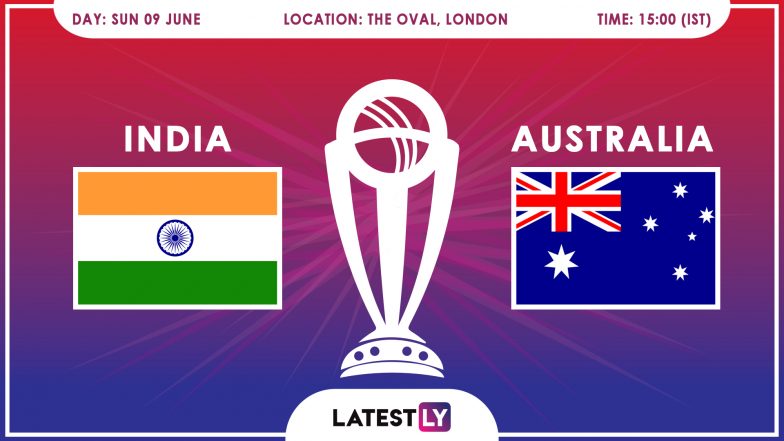 London, June 8: M.S. Dhoni's gloves controversy will take centre stage even as India and Australia look to iron out the flaws and bring their best to the table when they lock horns in a marquee World Cup encounter at the Kennington Oval on Saturday. ICC Cricket World Cup 2019 – Points Table.

India's opening game in the ongoing World Cup saw Dhoni once again profess his love for the security forces after he was spotted with the regimental dagger insignia of the Indian Para Special Forces on his wicket keeping gloves.

The Army insignia was spotted on Dhoni's gloves as television replays showed him stumping Andile Phehlukwayo in the 40th over of the innings bowled by Yuzvendra Chahal. India vs Australia, ICC Cricket World Cup 2019 Match 14th Live Cricket Score.

While the BCCI asked the ICC to allow Dhoni to continue sporting the the dagger insignia, the game's governing body rejected the plea, saying that the regulations for ICC events do not permit any individual message and that the logo also breaches the regulations in relation to what is permitted on wicketkeeping gloves.

Coming to the match, India eased past South Africa in their first game while the Aussies had to struggle against the West Indies. In the end, the Aussies rode on their proven performers and the surprise package in Nathan Coulter-Nile to post a victory.

In their first World Cup tie, the defending champions made short work of lesser lights Afghanistan. India, on the other hand, had leg-spinner Yuzvendra Chahal and pace ace Jasprit Bumrah to thank for their spirited bowling displays to keep South Africa in check.

Kagiso Rabada troubled the Indian top-order a bit with his fiery pace early on, but once the initial phase was over, Rohit Sharma struck a brilliant century with good hands from Dhoni and K.L. Rahul.

Australia, led by Aaron Finch were in a spot of bother after the West Indies pacers made life difficult for them with short-pitched deliveries. It looked at one stage that they would struggle to cross even 150 after batting first, but Steve Smith stemmed the rot for them with a patient 73 before Coulter-Nile played the innings of his life, becoming the highest run-getter at No.8 in a World Cup game with his 60-ball 92.

With the ball, Mitchell Starc picked up figures of 5-44 to become the fastest bowler ever to 150 ODI wickets, but the Aussies were kept on the edge by West Indies batters who were always within sniffing distance of the target until skipper Jason Holder (51) got out.

India will depend on wrist spinners Chahal and Kuldeep to deliver for them with Bumrah being the constant threat for any opposition. The Aussies will want to improve on their top-order batting as the likes of David Warner, Usman Khawaja and Glenn Maxwell were guilty of poor shot selection against the Windies. ICC Cricket World Cup 2019 Schedule in IST, Free PDF Download: Full Timetable of CWC19 Fixtures With Match Timings and Venue Details.