Iyer, playing his debut Test match, starred with a gritty fifty and also joined forces with Ravindra Jadeja to stitch an unbeaten 113-run partnership against New Zealand on the first day of the first Test match in Kanpur. Kyle Jamieson was New Zealand's best bowler with three wickets. 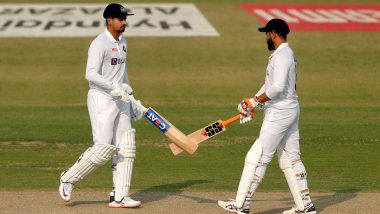 Half-centuries by Shubman Gill, debutant Shreyas Iyer and Ravindra Jadeja helped India reach 258/4 at the end of the first day's play of the first Test against New Zealand at the Green Park International Stadium in Kanpur on Thursday. Iyer made a name for himself after being given an opportunity in the Test team and scored a half-century on debut, handling the Indian middle-order on his own. He was ably supported by the veteran Jadeja, who once again showed why he is one of the best all-rounders around with an unbeaten fifty. He and Iyer struck a 113-run unbeaten stand to tilt the game slightly in India's favour at the end of the first day in Kanpur. Meanwhile, Kyle Jamieson continued to haunt India as he was once again the wrecker-in-chief with three wickets for 47 runs. Tim Southee was the other wicket-taker for the Black Caps. India vs New Zealand Highlights 1st Test 2021 Day 1:

Earlier, Ajinkya Rahane won the toss and opted to bat first in Kanpur. The Indian opening combination of Mayank Agarwal and Gill were shaky to start off with, yielding 21 runs. Jamieson broke the partnership by dismissing Agarwal (13). But Gill came good, scoring a fighting fifty (52) with five fours and one six. Just as he was looking set to score big, Jamieson bowled a beauty to castle him right after lunch. On a day that India walked into a Test match without its batting stars in Virat Kohli, Rohit Sharma and KL Rahul, the young guns made the most of it. After Gill, it was Iyer's turn to shine as he too started off nervously but did brilliantly well to pace his innings thereafter and score a fantastic fifty, which turned out to be one of India's best batting performances on the day. He was supported by Jadeja and the duo, especially in the last session, were dominant and kept India in full control of the game, leading a recovery after things looked bad at 145/4. The Iyer-Jadeja partnership yielded 113 runs so far and India would bank on them to carry on in the same manner on the second day as well.

But skipper Ajinkya Rahane (35) and Cheteshwar Pujara (26)--two of India's most experienced batters, failed to perform once again and got out after getting off to decent starts.

Let us take a look at the stat highlights of the game:

#Shreyas Iyer scored a fifty on his Test debut. He also became the 63rd Indian batsman to score a half-century in his debut Test match.

#He also was the 303rd player to represent India in Test cricket after he was handed the Test cap by the great Sunil Gavaskar at the start of the day.

#Shubman Gill struck a fifty too, his fourth in the longest format of the game.

#Kyle Jamieson played his first Test in Asia. He ended up as the best bowler for New Zealand with figures of 3/47.

Interestingly, New Zealand spin bowlers failed to impact the match on a track that was expected to support spin. Instead, all four wickets were taken by pace bowlers. The Kiwis would expect to take a few early wickets on the second day while India would rest their hopes on the unbeaten Iyer-Jadeja partnership to get to a safe total.

(The above story first appeared on LatestLY on Nov 25, 2021 05:18 PM IST. For more news and updates on politics, world, sports, entertainment and lifestyle, log on to our website latestly.com).