New Zealand won a series against India for the first time in 1980/81. It was the seventh series between the two sides. 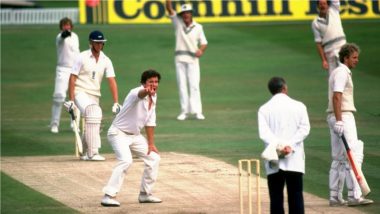 It took New Zealand seven attempts to win a Test series against India. They won the first Test match, in Wellington, retained the lead through a rain-washed draw in Christchurch, and held on to a draw in the decider, in Auckland.

Geoff Howarth’s 137 not out and Lance Cairns’ 5-33 helped New Zealand secure a 152-run lead in the first Test. But India clawed back in. An inspired spell from Kapil Dev (4-34) blew the top away, while debutant Ravi Shastri (3-9) ran through the tail. New Zealand were bowled out for exactly 100.

India needed 253, but none of their batters played that one big innings against Richard Hadlee (4-62). They lost by 62 runs with only Sandeep Patil (64 and 42) putting up any resistance. India vs New Zealand Part 6, 1976/77: Spinners Demolish New Zealand.

Almost three days of cricket were then washed out in Christchurch. And all seemed over for India when John Bracewell (4-61), New Zealand’s only specialist spinner of the series, and John Wright (110) put New Zealand ahead by 128 in Wellington.

The Indian fightback was led by a 93-run fifth-wicket stand between Dilip Vengsarkar (52) and Patil (57). Even then, Bracewell (5-75) kept his team’s target to 157. At 83/1, New Zealand were comfortably placed. They even promoted Richard Hadlee to go for the chase.

But the Indian left-arm spinners, Shastri and Dilip Doshi, held them back, forcing them to play out a draw. New Zealand finished on 95/5. Shastri and Doshi combined to take 37-17-42-4.

(The above story first appeared on LatestLY on Jun 21, 2021 05:28 PM IST. For more news and updates on politics, world, sports, entertainment and lifestyle, log on to our website latestly.com).