Virat Kohli Shares His Take on Out-of-Form Ajinkya Rahane Ahead of Proteas Tour, Says, ‘Important To Back Players With Past Peformances’

The Indian Test vice-captain has had a torrid time with the bat and there has been a lot of talk about his inclusion in the playing XI. "I can't judge Ajnkya's form," Kohli said after India's win over New Zealand in the second Test in Mumbai. 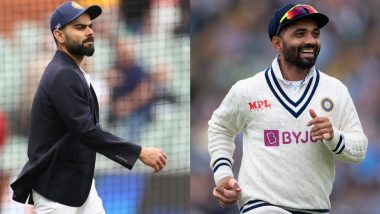 India might have won the two-match Test series against New Zealand at home but that does not mean the fact that there are no concerns within their camp. Amidst a lot of issues that have been making news over the past few days, one of them have been the form of vice-captain Ajinkya Rahane. The right-hander is undoubtedly an essential part of the side but lack of meaningful contributions with the bat has cast a huge doubt on his place in the playing XI and skipper Virat Kohli opened up on this topic, sharing his thoughts on the same. Ravi Ashwin Presents Axar Patel and Ravindra Jadeja With a Kiwi Twist; ICC Calls it 'Picture Perfect'

"I can't judge Ajnkya's form," Kohli, while speaking after India's win over New Zealand in the second Test match at the Wankhede Stadium, said. He also added, "Nobody can judge anybody's form, for that matter. Because only an individual knows what part of his game he has to work on. But, as I have said in the past, it is important to back those players who have made impact performances in difficult situations and important Test matches in the past. We don't entertain this kind of atmosphere in the team that a player starts worrying about 'what next' the moment he is under a little bit of pressure."

The Indian captain is a firm believer in his side and once again reiterated that he would not be involved in making decisions based on outside talks and pressure. Rahane, for the record, managed scores of 35 and 4 in the Kanpur Test match. Latest ICC Men's Test Team Rankings: India Climb To Top Spot After Win Over New Zealand

"Yes, we can't expect this kind of balance from those on the outside where those who are singing praises will be asking for a player's head in two months. We don't react that way ever nor will we do it in the future because we know how much effort and hard work goes in for any person to get into a positive mental space, and we will support it. Be it Ajinkya or whoever. We will never take decisions based on the outside atmosphere," he said.

India are set to have a problem in designing their batting order for the Tests against South Africa. Big names like Rohit Sharma and KL Rahul are likely to return which automatically would take out the duo of Shubman Gill and Mayank Agarwal. Instead of the top order, these batsmen can be utilised in the middle-order, which too seems packed at the moment, with Shreyas Iyer having made an impressive debut in the recently concluded series against New Zealand. There have also been recent reports, which have suggested that India might bring in a backup number three batsman in Priyank Panchal or Abhimanyu Easwaran.

The question is, would India persist with players like Cheteshwar Pujara and Rahane who are not in good form? See what Kohli said, "Those are discussions we are going to have now with the selectors. It is a good headache to have but you always want clarity in these things. And understand that it is always great to know exactly what you want to do before you head into a series like South Africa. That's a discussion that needs to take place: who we think are specialists in certain positions."

"These are not things I can sit here and answer in a press conference. You need discussions on these things, you need to analyse what is best for the team and the individuals as well, and come to a common conclusion. More often than not, issues are discussed, and we come to a collective decision, which feels the most balanced. That's the same process we are going to follow moving forward as well. It is upon lengthy discussions where everyone puts in their ideas," he added.

India would play three Tests against South Africa, the first of which would be played from December 26.

(The above story first appeared on LatestLY on Dec 06, 2021 08:02 PM IST. For more news and updates on politics, world, sports, entertainment and lifestyle, log on to our website latestly.com).