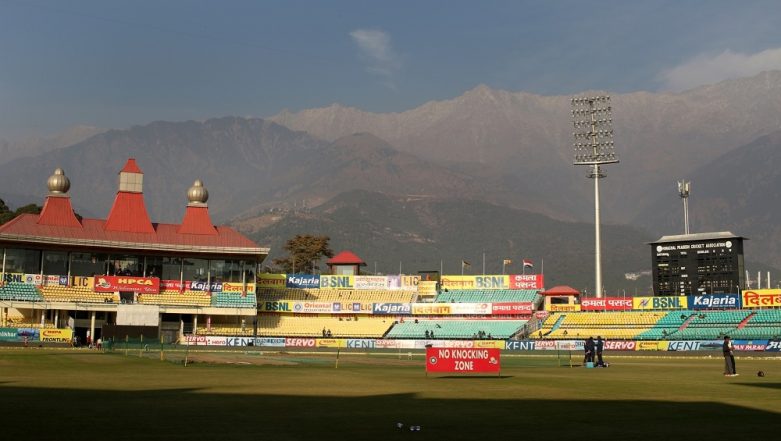 New Delhi, September 11: India are set to take on South Africa in the opening game of the T20I series at the picturesque Himachal Pradesh Cricket Association (HPCA) Stadium in Dharamsala on Sunday, but the ground staff have their task cut-out as the retreating monsoon looks set to play spoilsport. Rain is predicted from Wednesday itself -- as per the MET -- with the game on Sunday also under the cloud. Speaking to IANS, sources in the know of developments said that the ground staff are looking to keep up the work as also brace themselves for what could be a tough couple of days going into the game.

"The thing with the place is that once it starts raining, it goes on for a couple of days. The team is doing its job, but the problem is that you need at least around six or seven days leading into the game where the weather is perfect to prepare the wicket and with forecast for rain leading into the game on Sunday, sleepless nights are on the cards," the source explained. India 'A' Vs South Africa 'A' 2019: India Beat South Africa By 36 Runs to Win Series 4-1.

Asked if the rain woes could mean a wicket which would favour the faster bowlers, the source said: "See, the conditions here anyway hand the faster bowlers a slight edge. But yes, if covers are on for long periods of time and the wicket doesn't get enough sunlight, it will definitely slant more towards the faster bowlers. That could then lead to a situation where the ball dominates the bat."

Interestingly, while the Indians have rested the senior pace bowlers in Jasprit Bumrah, Mohammed Shami and Bhuvneshwar Kumar, South Africa will have the services of Kagiso Rabada. With Junior Dala for company, it could be a case of the Indian batsmen feeling the heat.

Curators are generally expected to prepare batting-friendly wickets for the shortest format of the game as the general belief is that spectators want to see batsmen hitting fours and sixes in this version of the game. But doesn't look like that will be possible for Sunday's game.