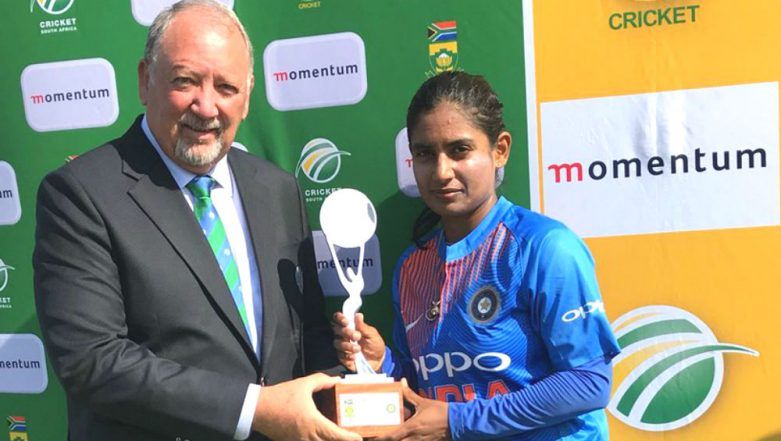 Potchefstroom, Feb 14: Opener Mithali Raj held the innings together with an unbeaten half-century as Indian women notched up a comfortable seven-wicket victory over South Africa in the first T20 International here today.

Mithali (54) shared two crucial stands -- a 69-run partnership for the third wicket with debutant Jemimah Rodrigues (37) and then added 52 runs with Veda Krishnamurthy (37 not out) for the unbroken fourth wicket -- as India chased down a target of 165 with seven balls to spare. India led the five-match T20 International series 1-0.

Mithali's knock, her 11th T20 International half-century, came from 48 deliveries and she hit six fours, one six and carried her bat through the innings. India finished at 168 for three in 18.5 overs.

The 17-year-old Mumbai player Rodrigues also batted impressively, hitting four boundaries and a six during her breezy 27-ball knock. After Rodrigues was out in the 14th over, Krishnamurthy did not allow the momentum to slow down, as she hit three boundaries and three sixes in her 22-ball innings.

The other opener, Smriti Mandhana, contributed 28 while one-down Harmanpreet Kaur was run out for naught in the first ball she faced. For South Africa, leg-spinner Dane van Niekerk and left-arm pacer Moseline Daniels took a wicket apiece.

Earlier, put into bat, South Africa scored 164 for four in their allotted 20 overs, with Chloe Tryon making a hurricane 32 not out off just seven balls. She struck four sixes and two boundaries in a late batting pyrotechnic.

Tyron took 23 runs (3 sixes and 1 four) from the final over bowled by a clueless Shikha Pandey. Nadine de Klerk was the other not out batsmen on 23 off 25 deliveries. Other notable contributors were opener Dane van Niekerk (38 off 31 balls) and Mignon du Preez (31 off 27 balls).

A heel injury has forced veteran India pacer, Jhulan Goswami, to withdraw from the five-match series but the team did not feel her absence till Tyron's blitz gave the South Africans a competitive total. For India, Anuja Patil grabbed two wickets for four runs while Shikha Pandey and Pooja Vastrakar took one apiece.