The Indian team is in South Africa currently and begin the new year from there with two remaining Tests and three One-Day Internationals (ODIs) against the home side. You can check the detailed schedule of Indian cricket team for 2022 below. 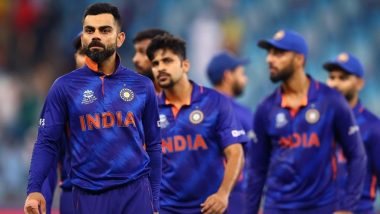 It is going to be an another busy year for the Indian cricket team despite the coronavirus pandemic. In 2022 India national cricket team will feature in around five home series and as many away tours and tournament. Apart from this there will be action in domestic circuit as well including the lucrative Indian Premier League 2022 (IPL 2022). The Indian team is in South Africa currently and begin the new year from there with two remaining Tests and three One-Day Internationals (ODIs) against the home side. You can check the detailed schedule of Indian cricket team for 2022 below. Year Ender 2021: Historic Win at The Gabba, WTC Final Loss, Virat Kohli’s Captaincy Controversy; Indian Cricket Team’s Review As We Move Into 2022.

After returning from South Africa, team India will host West Indies, Sri Lanka and Afghanistan for bilateral series. After these three home series, IPL 2022 will take place until May. In June, India will host South Africa for five-match T20I series which will be followed by tour to England in July.

In July-August, India will tour to West Indies for three ODIs and as many T20Is. In September, India will participate in Asia Cup T20 and a match against traditional-rival Pakistan is on cards. In 2022, we have ICC T20 World Cup as well which will be held in Australia. 2022 for India will end with Bangladesh touring the country. Year Ender 2021: From Virat Kohli vs BCCI Captaincy Controversy to Tim Paine’s Resignation Over Sexting Scandal, Check Out 5 Shocking Controversies That Rocked the Cricket World.

2 Tests and 3 ODIs vs South Africa

2 Tests and 3 ODIs vs Bangladesh

Apart from the bilateral series, India will have its eyes on ICC T20 World Cup trophy and Asia Cup as well. The last time India won an ICC trophy was in 2013, the Champions Trophy against England. So, in 2022, the Men in Blue will be looking to turn the tide and bring home an ICC trophy.

(The above story first appeared on LatestLY on Jan 03, 2022 05:35 PM IST. For more news and updates on politics, world, sports, entertainment and lifestyle, log on to our website latestly.com).