Whether it's Tim Paine's sexting scandal or Virat Kohli's row with the BCCI, following incidents have clearly rocked the cricket world. As the year 2021 is inching towards the end, we bring to you five controversies that grabbed the headlines this year. 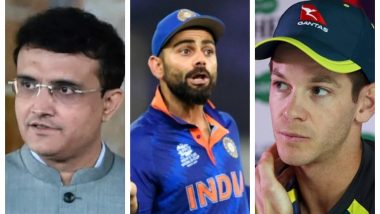 While the tournaments like T20 World Cup 2021, Indian tour to Australia and other tournaments left a long-lasting impression in the minds of the fans, there were many vinegar memories too that brought the cricketers trending for the wrong reasons. Whether it's Tim Paine's sexting scandal or Virat Kohli's row with the BCCI, these incidents have clearly rocked the cricket world. As the year 2021 is inching towards the end, we bring to you five controversies that grabbed the headlines this year.

It all started off with the Virat Kohli stepping down from T20I captaincy before the T20I World Cup. The mega-event in UAE was his last assignment as the skipper and when the BCCI announced the squad for South Africa, Rohit Sharma was made the skipper.  The BCCI made no tweet about the change in captaincy and the fans were quite disappointed by this behaviour. But what added fuel to the fire was BCCI President Sourav Ganguly's statement that he had asked Virat Kohli to reconsider his decision of stepping down from captaincy. But that infamous presser by Virat had a different tale to narrate and he went on to reveal that he was not asked to reconsider before stepping down from controversy. Additionally, Virat also said that he was informed 90 minutes before the selection meeting (for South Africa) before they changed the skipper. The fiery press conference grabbed headlines, created opinions and also was labelled as an ugly controversy. Kapil Dev Slams Virat Kohli For His Controversial Press Conference, Says 'Pay Attention to South Africa Tour, Not Good to Point Fingers'.

Here was yet another scandal that shocked the world of cricket as Australia's Tim Paine resigned over the sexting scandal. This incident happened right before the Ashes 2021-22 and the Australian team had to appoint a new skipper. Paine had apparently sent sexually graphic text messages to a female colleague in 2017. Tim Paine Sexting Scandal: Australian Cricketer Announces ‘Stepping Away From Cricket for an Indefinite Mental Health Break’.

Azeem Rafiq during an interview had revealed racism at the Yorkshire club. During an interview in 2020, he had spoken about the deep-rooted racism a the English club. The harassment was so bad that he even filed a complaint against the club. In June 2021, the club had to solve this issue via the process of judicial mediation. The club had offered him an apology where they admitted that Rafiq was subjected to racism. The chaos refused to die down and the matter went out of hands when a leaked report claimed that a player used the word “P***” while referring to Rafiq and labelled it as friendly banter. Another Asian player on the condition of anonymity claimed that a Muslim prayer mat was used by Yorkshire cricket players to clean up the mess from having sex with a woman on her period. They even said that the players urinated on the Asin player's head. Post this, Yorkshire chairman Roger Hutton resigned along with the board members Hanif Malik and Stephen Willis. Azeem Rafiq Recounts Racism Ordeal of English Cricket Culture, Reveals That His Career Suffered a Lot Due to His Different Skin Colour.

The Indian cricketers were subjected to racism when the Men in Blue toured Australia earlier in 2021. Mohammed Siraj and Jaspirt Bumrah were subjected to racist comments from the fans seated at the stans of the Sydney Cricket Ground.  Needless to say that these comments also created a controversy. Video Claiming Spectators at SCG Use 'Racial Slur' Against Mohammed Siraj During IND vs AUS 3rd Test Goes Viral.

NowTaliban took over Afghanistan in August 2021 and they imposed a ban on women's sport. As a result, Cricket Australia postponed a one-off test match against Afghanistan.

That's all we have for now. If you think that we have missed out on other controversies in this list, feel free to leave your comments below. Also, we wish all our readers a very Happy New Year!

(The above story first appeared on LatestLY on Dec 21, 2021 10:47 PM IST. For more news and updates on politics, world, sports, entertainment and lifestyle, log on to our website latestly.com).