India had a very eventful 2021 in cricket. From COVID threatening the IPL and also the Test series in England to Virat Kohli leaving T20I captaincy and then getting removed as ODI captain, take a look at some major developments in Indian cricket in 2021. 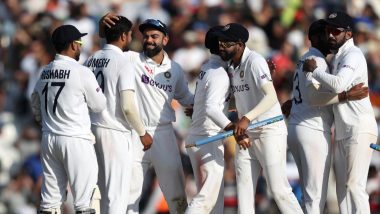 What a year it has been for Indian cricket! It has well and truly been a mix of everything put together in one single year. There were the victories, some harsh defeats, some moments to cheer on forever and some episodes that, all Indian cricket fans would love to forget and not remember any sooner in the near future. From conquering the Gabba at the start of the year to plotting a series win in South Africa by the end of it, 2021 turned out to be pretty eventful and exciting at the same time. Year Ender 2021: From Virat Kohli vs BCCI Captaincy Controversy to Tim Paine’s Resignation Over Sexting Scandal, Check Out 5 Shocking Controversies That Rocked the Cricket World.

In this article, we shall take a look at how Indian cricket performed, taking you through into all major tournaments, bilateral series and one-off contests.

2021 was a glorious year for Test cricket. For the big reason that the team started making winning overseas, a habit. No Indian fan can ever forget how Rishabh Pant smacked that four through the covers to bring up India's epic Test win at the Gabba. Well, that was just a prelude to things to come for the team in 2021. India not only did breach Australia's fortress at the Gabba but also won the Test series 2-1 (after being bowled out for 36, in the first innings of the first Test), becoming the only Asian nation to do so twice, Down Under.

The Gabba win was something. It has to go down in Indian Test cricket history as one of the best ever. However, there were some other memorable wins as well. Year Ender 2021: Wanindu Hasaranga, Shaheen Afridi and Other Top Young Cricketers Who Stole the Show.

# Beating England by an innings and 25 runs: Indian spinners Ravichandran Ashwin and Axar Patel spun a web around England in Ahmedabad as Virat Kohli's men roared to an emphatic win at the Narendra Modi Stadium. Although there were questions raised on the pitch, one cannot deny the performance of the Indian team as they won the match as well as the series 4-1 after losing the first Test.

# Conquering Lords: Beating England at the 'Home of Cricket' is anyday a big achievement for any side and India were able to pull off this amazing feat earlier this year. Kohli's India were on the backfoot and a defeat looked imminent but the inaugural World Test Championship finalists surely staged a counterattack for many to remember. On the last day of the match, India bowled out England who were set a target of 200 to chase down. It was one of India's most epic overseas wins.

Lowest point: The lowest point in India's Test cricket this year has to be the defeat in the World Test Championship final. India were easily the most dominant side in the competition but in the final, it was New Zealand once again that proved to Virat Kohli and his side's nemesis. A clinical performance from the Kiwis saw them beat India to the title and that was arguably one of the saddest moments in Indian Test cricket this year.

The Indian team primarily played only two ODI series this year. One at the start of 2021 against England at home and the other, with a second-string Indian side against Sri Lanka, winning both. One of the biggest highlights of India's ODI performance in 2021 was the strong bench strength that the nation has. With big names like Virat Kohli, Rohit Sharma and KL Rahul back in England for the Test series, India still managed to put together a squad that the ODI series in Sri Lanka.

India did have quite some time in T20 cricket this year. India had only played two T20I series--against England and Sri Lanka--in which they won one and lost another and the major highlight was definitely the T20 World Cup, which turned out to be a forgettable one for India. Starting off with a defeat to Pakistan--a first one in World Cups--India's T20 World Cup 2021 campaign went from bad to worse as they were handed a resounding defeat, once again by New Zealand in their second group match. Needless to say, this was the nail in the coffin and despite winning the other three group matches with handsome margins, India failed to make it to the semifinals, in what was Virat Kohli's last tournament as T20I captain.

# Beating former T20 World Cup finalists: It is no easy task to beat a former champion and that's why, the series win over England at the start of the year would always be an important and memorable one. India won the closely-contested five-match series 3-2.

# Whitewashing New Zealand at home: The Kiwis, having failed to win the World Cup, lost miserably to India in the three-match T20 series in what was Rohit Sharma's first assignment as full-time T20I captain. This was also Rahul Dravid's first series as India's new head coach.

Lowest point: Many would reckon that the loss to Pakistan in their first game of the T20 World Cup was low but what was even hurtful was the defeat against New Zealand. India did not manage to put up a fight even, only scoring 111 runs which was later comfortably chased down by the Kiwis. That loss kind of spelled the end of India's chances of qualifying for the semifinals.

Rohit Sharma and Ravichandran Ashwin were undoubtedly the standout performers in the year for India. Rohit Sharma's ranks as an international cricketer rose up when he performed well in the Tests against England. Later, he also became the new T20I and ODI captain of India. With a total of 1330 runs across formats, he is the highest run-getter for India in 2021.

Ashwin too had a decent year, despite being left out of the Tests in England. He ended as the highest wicket-taker for India in 2021, with a total of 52 scalps.

Players to watch out for:

1) Ruturaj Gaikwad: The young Maharashtra batter made a mark in last year's IPL and he continued from where left off, ending up as the highest run-getter with 635 runs and also leading Chennai Super Kings to the title. He continued his form in the Vijay Hazare Trophy, scoring a record four centuries in the group stage.

2) Venkatesh Iyer: The Madhya Pradesh all-rounder rose to fame pretty quickly towards the end of 2021. He made his IPL debut for Kolkata Knight Riders in the second leg of the competition in UAE and instantly made an impact, getting the team off to good starts and eventually leading them to the final. He was later called up to India's T20I side for the series against New Zealand and he impressed in the India colours as well. He also performed well with his all-round abilities in the Vijay Hazare Trophy.

3) Harshal Patel: The medium pacer made quite an impact when it comes to both his IPL franchise Royal Challengers Bangalore and also India. He ended IPL as the highest wicket-taker with 32 scalps, the highest by any bowler in any edition and later, made his India debut in the T20I series against New Zealand, taking wickets and scoring crucial runs to help the Men in Blue complete a whitewash.

IPL 2021 got postponed midway: The IPL 2021 edition held in Kolkata had to be postponed due increasing number of COVID cases within the bio-bubbles. It resumed in the UAE in September.

Virat Kohli steps down as T20I captain: Citing workload management, Virat Kohli relinquished captaincy of India's T20I side. He later announced that IPL 2021 would be his last as RCB captain as well.

Controversy brewing between Virat Kohli and BCCI president Sourav Ganguly: Virat Kohli's blockbuster press conference where he spoke about lack of communication from the BCCI on his removal as ODI captain and also his decision of quitting T20I captaincy contradicted the version shared by BCCI. Board president Sourav Ganguly had said that he had requested Kohli to not give up T20I captaincy but the latter contradicted it saying that his call was accepted by BCCI in a progressive manner.

(The above story first appeared on LatestLY on Dec 29, 2021 03:16 PM IST. For more news and updates on politics, world, sports, entertainment and lifestyle, log on to our website latestly.com).