Former world champion PV Sindhu and world championships bronze medallist Lakshya Sen sailed into the second round of the 2022 Indonesia Masters after winning their opening-round matches at Istora Stadium, here on Wednesday. 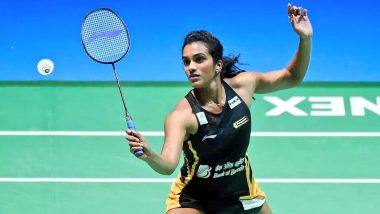 Jakarta (Indonesia), June 8 : Former world champion PV Sindhu and world championships bronze medallist Lakshya Sen sailed into the second round of the 2022 Indonesia Masters after winning their opening-round matches at Istora Stadium, here on Wednesday. Sindhu, seventh in the badminton world rankings, came from behind to beat world No 22 Line Christophersen of Denmark 21-18, 15-21, 11-21 in her women's singles opener. KIYG 2021: Shuttler Unnati Hooda Beats Tasnim Mir in Nail-Biter To Win Title.

The Indian shuttler took an early 8-3 lead in the first game but was pegged back after conceding a series of successive points to her Danish opponent. In the second game, Sindhu recovered well to come back from an 11-10 deficit to stretch the match into the decider. The deciding game, however, was a straightforward affair for the two-time Olympic medallist. After being tied at 6-6, Sindhu dominated the match and lost only five points from thereon.

This was Sindhu's fourth win against Line Christophersen in as many matches. She will now face world No 30 Gregoria Mariska Tunjung of Indonesia in the round of 16 on Thursday. Meanwhile, India's top-ranked men's singles badminton player Lakshya Sen got the better of world No 21 Hans-Kristian Vittinghus of Denmark in straight games. Sen, ranked world No 9, defeated his Danish opponent 21-10, 21-18 to move into the second round. It was Lakshya's first win against Hans-Kristian Vittinghus in their third meeting. He will now face world No 13 Rasmus Gemke for a place in the quarter-finals. Italian International 2022: Malvika Bansod Loses to Wen-Chi Hsu, Finishes As Runner-Up.

Earlier in the day, Aakarshi Kashyap, a member of India's Uber Cup team, lost to world No. 16 and former Pan American champion Beiwen Zhang of the USA 12-21, 11-21 in the round of 32. World No 30 Sameer Verma also bowed out of men's singles after going down to Indonesia's Chico Aura Dwi Wardoyo 21-17, 21-15. In the mixed doubles category, B Sumeeth Reddy and Ashwini Ponappa will face Indonesia's Hafiz Faizal and Serena Kani in the main round later. London 2012 bronze medallist Saina Nehwal, HS Prannoy and former Commonwealth Games champion Parupalli Kashyap pulled out before the start of the tournament. Kidambi Srikanth also withdrew earlier.

(The above story first appeared on LatestLY on Jun 09, 2022 10:33 AM IST. For more news and updates on politics, world, sports, entertainment and lifestyle, log on to our website latestly.com).