With defending champions Mumbai Indians out of IPL 2018, it is certain that we will have a new champion. 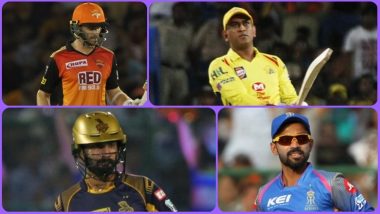 SRH became the first team to qualify for the playoffs, followed by CSK, KKR and RR.

After an intriguing league stage matches, the IPL 2018 playoffs lineup is complete. Sunrisers Hyderabad (SRH) became the first team to qualify for the playoffs, followed by Chennai Super Kings (CSK), Kolkata Knight Riders (KKR) and very recently Rajasthan Royals (RR). Till final match of the round-robin stage, one place in the playoffs was up for grabs. Kings XI Punjab (KXIP) lost to CSK and thus RR made it to last four.

Both SRH and CSK finish with 18 points from 14 matches. But thanks to superior run-rate Sunrisers finish with numero uno position while Super Kings remain at second. Knight Riders ended with 16 points while Royals 14 points and thus are placed third and fourth respectively. With defending champions Mumbai Indians out of IPL 2018, it is certain that we will have a new champion. Though not the first-timer, all four teams in the playoffs have at least once won the IPL title.

So, as per the IPL 2018 playoffs schedule, SRH will be up against CSK. The winner of this match will gain a direct entry into the IPL 2018 final. The loser will get the second shy at the finals and will face the winner of Eliminator match between KKR and RR.

After having qualified for the next round, CSK becomes the only team to make it to the playoffs of each season they featured in. Pertinently, CSK were suspended for 2016 and 2017 and thus missed these two editions of the IPL.

Meanwhile, CSK and KKR will be looking for their third IPL title. Both the teams will have a chance to match the most number of IPL title wins, which is three, currently held by Mumbai Indians. RR and SRH, on the other hand, have previously won one IPL title each.

(The above story first appeared on LatestLY on May 21, 2018 09:29 AM IST. For more news and updates on politics, world, sports, entertainment and lifestyle, log on to our website latestly.com).