IPL 2022: Hitting 117m Six Was Obviously Fun; Different From the One at Leeds, Says Liam Livingstone

Punjab Kings all-rounder Liam Livingstone said for him, hitting a 117m six off Mohammed Shami in his side's win over Gujarat Titans in IPL 2022 was fun. At the same time, Livingstone pointed out that it was different from the 122m six hit by him off Haris Rauf in England's T20I match against Pakistan last year. 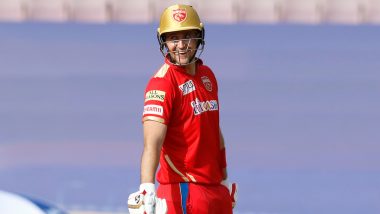 Mumbai, May 7: Punjab Kings all-rounder Liam Livingstone said for him, hitting a 117m six off Mohammed Shami in his side's win over Gujarat Titans in IPL 2022 was fun. At the same time, Livingstone pointed out that it was different from the 122m six hit by him off Haris Rauf in England's T20I match against Pakistan last year. In the 16th over, with Punjab needing 27 runs to win, Livingstone slammed Shami for a monstrous 117m six over deep square leg, which led to commentators on-air say with delight, "It's out the stadium! Have never seen a six as big as that one." Livingstone would then hit two more sixes and as many fours to complete the chase of 144 with four overs to spare. IPL 2022: KL Rahul’s Amazing Shots Prove He Is in Best Phase of His Career, Says Suresh Raina.

"The one at Leeds (122m) and this (117m) was different, but it feels great to hit it as big as you can as we are in the entertainment business and it is great for the fans. Unfortunately, it gives us only six and not more," said Livingstone in a pre-match chat with broadcasters Star Sports. Asked about why he went after Shami in that match, Livingstone explained, "I took on Shami because I thought I can hit to the short boundary, not the NRR. Also, Rashid (Khan) and Lockie (Ferguson) had overs at the other end. But sometimes, when you get going you cannot stop. I have been trying to increase consistency on the sixes and it is getting better. Hopefully, I can do more of the same today (against Rajasthan Royals on Saturday)." David Warner Had To Be Benched Due To Disciplinary Issues In IPL 2009, Says Virender Sehwag.

Livingstone revealed that hitting sixes is an ability which is purely dependent on confidence. "I don't have a solid defence, I can't say that, being able to power sixes is a confident thing, it puts the pressure back on the bowlers. If its in my half, I do try to hit sixes and transfer the pressure back onto the bowling unit. I have worked hard on my consistency, it has got better now, have also been working on hitting sixes in a consistent manner." Livingstone, 28, signed off by saying that pitch will play an important factor in an afternoon match against Rajasthan to be in contention for playoffs. "It does depend on the pitch, this is a massive game and we'll need to win most of our games, so I think it's a good situation to be in. See what the pitch is, see how it is playing and if it's in your zone, go for your shots."

(The above story first appeared on LatestLY on May 07, 2022 05:24 PM IST. For more news and updates on politics, world, sports, entertainment and lifestyle, log on to our website latestly.com).