Rajasthan Royals all-rounder Ravichandran Ashwin once again hogged the headlines with his bizarre batting stance against Delhi Capitals (DC) on Wednesday at the Dr. DY Patil Sports Academy in Mumbai. 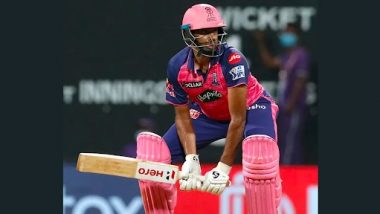 Mumbai, May 12: Rajasthan Royals all-rounder Ravichandran Ashwin once again hogged the headlines with his bizarre batting stance against Delhi Capitals (DC) on Wednesday at the Dr. DY Patil Sports Academy in Mumbai. Ashwin was promoted after Rajasthan lost their best batter Jos Buttler, who is the 'Orange Cap' holder of the 2022 Indian Premier League (IPL) with three centuries.

Ashwin's promotion to three as a pinch hitter began to work well when he carted a brace of fours off Shardul Thakur; a neat whip over mid-wicket was followed by a crisp punch through extra cover. Ashwin further took a four with a cut through point and followed it up by dancing down the pitch to hit a six off Axar Patel in the final over of the powerplay. Ravi Ashwin Hits Maiden IPL Fifty in RR vs DC Clash.

We have an answer to Kedar Jadhav's floor bowling. #IPL pic.twitter.com/rY5LJBvvQi

But as much as, Ashwin's batting is not in the news, more than that his 'stance' is being discussed in social media platforms. The 35-year-old pulled off the funny-looking stance while facing left-arm wrist-spinner Kuldeep Yadav. The batter might have taken the stance in order to disturb the bowler's concentration. One social media user wrote on Twitter, "We have an answer to Kedar Jadhav's floor bowling."

After reaching his maiden IPL fifty in 37 balls, Ashwin miscued to mid-off but did his job to perfection. Padikkal continued to take runs off Marsh, taking successive fours - with a tickle through fine leg and slice over in-field at short third man.

Ashwin has been in discussion many times for his 'out-of-the-box' thinking on cricket field. In 2019, he was in the news due to Mankad's dismissal of Jos Buttler. In this season too, he was the first batsman to be 'retired out' during the game against Lucknow Super Giants.

Ashwin, who was batting at 28 off 23 balls, was retired out by the Royals with youngster Riyan Parag succeeding him in the batting order. The incident sparked discussions on social media with many fans and former cricketers expressing varied opinions on the same.

(The above story first appeared on LatestLY on May 12, 2022 01:59 PM IST. For more news and updates on politics, world, sports, entertainment and lifestyle, log on to our website latestly.com).