For Mumbai Indians, IPL 2022 has been a season to forget with eight consecutive losses before bagging some wins. But by then, it was too late for them to be in reckoning for the playoffs. 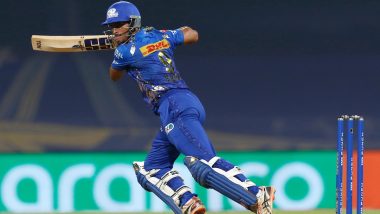 Mumbai, May 20: For Mumbai Indians, IPL 2022 has been a season to forget with eight consecutive losses before bagging some wins. But by then, it was too late for them to be in reckoning for the playoffs. In a season where their big names didn't do much, it was the youngsters who produced stunning performances to be the positives for Mumbai in a forgettable season. Now, ahead of their final league match against Delhi Capitals on Saturday, head coach Mahela Jayawardene signalled teenage left-handed batter Tilak Varma as the standout young player for the side in IPL 2022. Did MI Drop Arjun Tendulkar Debut Hint Ahead of IPL 2022 Game Against Delhi Capitals? (Watch Video).

The Hyderabad-based Varma has been Mumbai's leading run-getter in the tournament, making 376 runs in 13 matches at an average of 37.60 and strike-rate of 131.46. "If you pick on individuals, Tilak is probably the standout young player, scoring almost 400 runs. He has been asked to do a few different roles this year for us, batted at three, four, five and even finished a game recently. He has faced up to the challenges well in different situations against good bowling units. He has responded well and shown lot of good qualities along the way," said Jayawardene in the pre-match virtual press conference.

Jayawardene's words come eight days after captain Rohit Sharma had earmarked Varma to be an all-format player for India very soon when the youngster absorbed pressure and remained unbeaten on 34 in a small chase of 98 against Chennai Super Kings. He further spoke about South Africa batting prodigy Dewald Brevis, who sparkled in the chances he got in the season.

"If you take someone like Brevis, an 18-year-old who came straight from the U19 World Cup without much first-class cricket but we gave him freedom to go out and play his game. He showed what he is capable of. It was about managing his emotions along the way that. He probably got overwhelmed a little bit and that's where we felt that we need to take him away from that environment and got through the processes about what the game is all about. I am very excited that these two young guys have shown a lot of potential for us." Apart from batting, Mumbai had exciting young talent in left-arm wrist spinner Kumar Kartikeya Singh, who was elevated to main squad after being associated as a net bowler. In four matches, Kartikeya impressed cricket watchers with his control and variations, picking five wickets at an economy rate of 7.84. Jayawardene has been floored with his dedication and mindset.

"At the same time, a great story in Kumar Kartikeya. The more I speak to him, you get to feel about going back to the time, understanding how tough someone's life can be and when you have these kinds of dreams, the path he has taken. He's looking forward to go home after years; he hasn't seen his mother or father, which is an amazing story." RCB vs GT, IPL 2022: Virat Kohli Reveals, He Was Trying to Get into Positive Frame of Mind with Every Ball.

"But the commitment he has shown through the season, when he came in as a support bowling group, is something amazing to work with. As a coach, I am so delighted to have individuals like him, the determination he has shown and when you talk to him, he is a very smart kind because he has learnt a lot through life and things on as well as off the field, which is an amazing story." Jayawardene had more words of praise for young all-rounders Hrithik Shokeen and Ramandeep Singh. "(Hrithik) Shokeen has been brilliant; is a very bubbly character and has shown good potential to develop not just as a bowler, but as a genuine all-rounder, which is very exciting."

"In the last few games, Ramandeep has shown potential and what he can do. So, there are a lot of options going forward, getting everyone together, understanding their strengths and weaknesses. Having lot of younger guys in the squad brings a lot of energy, which bodes well for us to going into the next season." Jayawardene admitted that Mumbai had intended to bring in some youngsters at the Mega Auction to give them chances and develop them into mainstays for the franchise in future.

"At the auction, we made a conscious effort of bringing in few youngsters into the squad. We knew that they are very talented and exciting prospects. During the season, we had the opportunity to give them games, something which we haven't been able to do in last few seasons. Through that, they have actually put their hand up and performed." "It's great for us to see how they handle pressure in the middle, especially in IPL cricket where it is not easy. Overall, very happy with the way those young guys have reacted to those situations. They have learnt a lot; we have learnt a lot about them. As a franchise moving forward, it gives us a lot of options in how we need to rebuild the team."

(The above story first appeared on LatestLY on May 20, 2022 06:03 PM IST. For more news and updates on politics, world, sports, entertainment and lifestyle, log on to our website latestly.com).