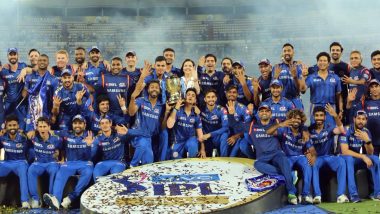 The signature tune of the Indian Premier League sends the most silent crowd into a frenzy. The fans go wild as if struck by an electric jolt. Ahead of every season, we have the teams and the IPL releasing a new theme song. These theme tracks are mostly played only for about three months have remained in the archives of our memories. Whether its the anthem 'Aayenge Hum Wapis' for IPL 2020 or 'Yeh Hai Dhartipar Karma Yug’ which was released in the introductory season of the IPL in 2008, these anthems have remained with us. Ahead of the IPL 2020 season, let's have a look at five best anthems so far. IPL 2020 Full Schedule For Free PDF Download Online: Time Table With Date & Match Time In IST, Venue Details, Fixtures of Indian Premier League 13 in UAE

Now while a lot of us would disagree with this, but the anthem released this year, 'Aayenge Hum Wapis' tops the list. Particularly because of the fact that cricket makes a comeback after a pandemic of the coronavirus.

We like this anthem 'Game Banayega Name' particularly because of the fact that it emphasises on the fact that only playing well will reap you with benefits. Big names do not matter if you don't perform well. The anthem was released for IPL 2019.

In 2017, the Indian Premier League was celebrating a decade of IPL and thus the anthem was dedicated to the fans who stood tall to support the tournament. The track was crooned by 'Badtameez Dil' singer Benny Dayal.

This track 'Ek India Happy Wala' was released ahead of IPL 2016. It is often said cricket and Bollywood bring people together and blurs the differences. The anthem emphasises on how the IPL fever encapsulates the entire nation.

Now, this was for the introductory season of the tournament in 2008. The anthem was released for IPL 2008 when we still had players like Shane Warne, Sourav Ganguly, VVS Laxman, Rahul Dravid, Sachin Tendulkar, Ricky Ponting and many other stalwarts being active as players. Most of the names mentioned are now a part of the support staff.  This was our obvious choice.

Talking about of the Indian Premier League 2020, the fans, players and the franchises are quite excited for the upcoming season. The IPL 2020 will have Chennai Super Kings and Mumbai Indians locking horns with each other. The mouth-watering battle will be held on September 19, 2020, at the Dubai International Stadium.

(The above story first appeared on LatestLY on Sep 10, 2020 05:01 PM IST. For more news and updates on politics, world, sports, entertainment and lifestyle, log on to our website latestly.com).