Is it Going to be ICC T20 World Cup 2020 vs IPL 13 Once Cricket Resumes Amid Coronavirus Crisis?

ICC's board meeting will take place on June 10, 2020 and the decision on the future of T20 World Cup 2020 is likely to be made. If T20 World Cup is postponed or cancelled, then BCCI could well get a window to organise IPL 2020. 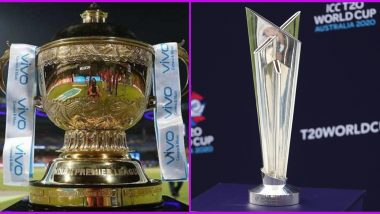 International Cricket Council (ICC) and Board of Control for Cricket in India (BCCI) could be at loggerheads as cricket is heading towards resumption amid coronavirus pandemic. Following the COVID-19 virus outbreak, sporting activities including cricket were suspended as most of the countries opted for lockdown. In India, the nationwide lockdown resulted in the postponement of Indian Premier League 2020 (IPL), which was slated to begin from March 29. After being initially postponed to April 14, the T20 league was eventually deferred indefinitely. BCCI has not cancelled IPL 2020 as of yet and looks like it is in the mood to hold the cash-rich league later this year. Meanwhile, the Indian government has eased some restrictions and further relaxations are expected.  IPL 2020 Only Possible if Normalcy Returns by October, Feels Former SRH Bowler Ashish Nehra.

In the meantime, the time seems to be running away from BCCI as they want a quick decision on the future of T20 World Cup 2020 to be made. And it appears by October, BCCI will be in a position to hold the tournament, provided COVID-19 virus is contained by then. But that window is already reserved for T20 World Cup, and It is very much likely that the world-stage tournament will be given preference over IPL. However, if BCCI goes hell-bent on conducting IPL 2020, given the revenue Indian board generates for ICC and the say it has in world cricket, we could witness a toss-up between IPL and T20 World Cup.

(The above story first appeared on LatestLY on Jun 10, 2020 06:57 PM IST. For more news and updates on politics, world, sports, entertainment and lifestyle, log on to our website latestly.com).