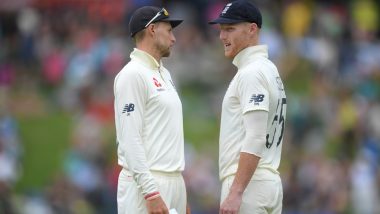 Southampton, July 7: Stand-in England captain Ben Stokes on Tuesday revealed a classy message from regular Test skipper Joe Root ahead of the first match of the three-Test series against West Indies at Ageas Bowl starting Wednesday. Stokes will be leading England in the first Test after Root left the bio-secure bubble in Southampton for Sheffield, to be with his wife, who is expecting their second child.

"I haven't been given much advice, although there's been a lot of opinions flying around," Stokes told reporters as per metro.co.uk. "The best message I've received was when I got my photos done yesterday, with the blazer. Rooty just left a message on the hanger which said 'do it your way'." Joe Root Becomes First Batsman to Score Century in ICC Cricket World Cup 2019, Notches Highest Score During PAK vs ENG CWC19 Match.

Stokes also said he will try to pick brains of some of the more experienced players in the side to help him on the field. He also stated that Root will be available for him from home despite being away from the team for family reasons.

"I'm going to be very open to opinions from other people and just because Joe isn't here, that doesn't mean I'm not going to use him," Stokes, who will be England's 81st Test captain, said. "Joe has always been very open and willing to hear advice from other players so I think I would be stupid to go away from that. "We've got so much experience in this team that it would be silly not to lean on that if I feel as if I need some advice.

"Because of Joe's personal situation, we've been letting him deal with that and I haven't been on him too much. But I know he'll be at home watching and his phone will always be available if I need him," he added. Root is expected to return for the final two matches of the series which are scheduled to be played at Old Trafford, starting July 16 and July 24 respectively.

(The above story first appeared on LatestLY on Jul 07, 2020 10:38 PM IST. For more news and updates on politics, world, sports, entertainment and lifestyle, log on to our website latestly.com).