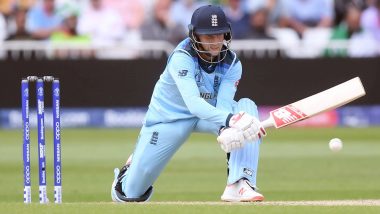 Joe Root scored a fine century against Pakistan in the game no 6 of ICC Cricket World Cup (CWC), 2019. Root was dropped by Babar Azam on first slip on Mohammad Amir's bowling. This has indeed proved costly for Pakistan as England are now currently on the driving seat with well-set Root and Jos Butler on the crease. Root scored his century from 97 balls and becomes the first batsman to do so in CWC 2019.  Pakistan vs England Live Cricket Score 6th ODI Match.

England did not start well in their chase as they lost both their openers Jason Roy and Jonny Bairstow in first 10 overs. Roy was dismissed by Pak spinner Shadab Khan while Bairstow got out in the 9th over by Wahab Riaz. Little later ENG skipper Eoin Morgan and English all-rounder Ben Stokes got out cheaply by Mohammad Hafeez and Shoaib Malik respectively. Currently, Butler has also scored a half-century and is batting at the strike rate of above 140.

England after getting the bad start are cruising along well to chase down the target of 249 runs. If Pakistan has to win this match, they have to quickly break Butler and Root partnership. The 100 run partnership between Butler and Root came in just 81 balls.

(The above story first appeared on LatestLY on Jun 03, 2019 10:13 PM IST. For more news and updates on politics, world, sports, entertainment and lifestyle, log on to our website latestly.com).