Joe Root Smashes Century During NZ vs ENG 2nd Test 2019, England’s Skipper Plays a Captain's Knock To Save His Side From Kiwis Attack 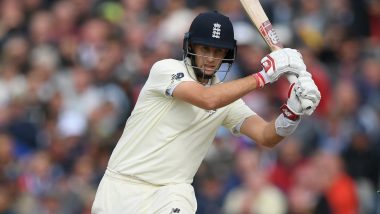 England skipper Joe Root scored a century during NZ vs ENG 2nd Test 2019 which is being played at Hamilton. Root ton came at the right time when his team needed it. On Day 2 at stumps, England was struggling at 39/2 after losing Dominic Sibley and Joe Denly. New Zealand after putting into bat first made 375 runs. The first day of the match was hit by rain and England will have to do something special to win this Test Match, or else it will go in the favour of New Zealand. Root confidently played Kiwi pacers who are looking dangerous on this track at Hamilton. New Zealand Vs England, Live Cricket Score 2nd Test Match.

This is Joe Root's 17th Test century of his career and he indeed played a captain knock. Earlier in the day, we saw Rory Burns score a century where he made 101 runs before getting run-out by Jeet Raval. England's all-rounder Ben Stokes failed to play a big inning as he got dismissed by Tim Southee after making 26 runs. Joe Root took 259 deliveries to score a century and he is looking forward to taking the inning as deep as possible, so that New Zealand doesn't get the chance to put up a big target. At the same time, English bowlers will play a crucial role when they will come out to bowl in the 2nd inning.

Joe Root is currently batting on the crease with Ollie Pope as England has lost 5 wickets after scoring 250 plus runs. The visitor still trails by more than 100 runs, Kane Williamson and his men would look forward to dismissing Root and take a strong grip over this match. New Zealand lead the series by 1-0 as they defeated England in the 1st Test by an inning and 65 runs.

(The above story first appeared on LatestLY on Dec 01, 2019 09:37 AM IST. For more news and updates on politics, world, sports, entertainment and lifestyle, log on to our website latestly.com).