England is playing Australia in the 2nd Test Match of Ashes 2019 at Lord's Cricket Ground, London. Steve Smith was batting at 80 runs when Jofra Archer's bouncer hit the Australian batsman. Archer has made a debut in this Test match and he has taken two wickets so far of Tim Paine and Cameron Bancroft. 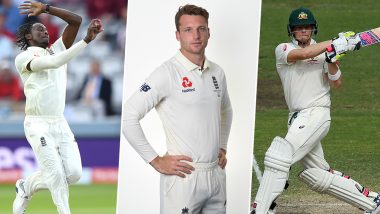 England is playing Australia in the 2nd Test Match of Ashes 2019 at Lord's Cricket Ground, London. Steve Smith was batting at 80 runs when Jofra Archer's bouncer hit the Australian batsman. Australia after winning the toss in this Test match, elected to bowl first where England made 258 runs in the first inning. In reply, Australian batsmen struggled to score, however, Smith played a fine knock of 92 runs before getting dismissed by leg before by Chris Woakes. Meanwhile, Jofra Archer and Jos Butler are being slammed by netizens to see and smile at the opponent batsmen Smith writhes in pain on the ground. Steve Smith Hit by Jofra Archer's Lethal Bouncer During Ashes 2019 2nd Test, Twitterati Shares Video and Says 'Only Way to Dismiss Him' in a Match.

Jofra Archer is known for bowling such deliveries. Recently in ICC Cricket World Cup 2019 tournament, he even caused Hashim Amla concussion by his bouncer. He has such immense pace that we have even seen his delivery hit the stump and cross-boundary line.  Archer has made a debut in this Test match and he has taken two wickets so far of Tim Paine and Cameron Bancroft. Ashes 2019 First Test Stats: Steve Smith Surpasses Virat Kohli, Stuart Broad Takes 450 Wickets & Other Records Made in Edgbaston Test.

England what a disgrace! Your players laughing at the opposition on the ground and your supporters booing him as he walks off. #Ashes19 pic.twitter.com/lzwO4tZdCh

Archer and Butler Wished To Be on Twitter Feed

Disgusting Behaviour By Archer and Butler

#Ashes19 Look at these pricks laughing while Steve Smith is lying on the ground after being hit in the head. Disgusting. pic.twitter.com/la5HDyYB9R

Archer and Butler Compared to Clown

look at these two fuckwits laughing at smith. no respect for this clown!!!!!!!! #Ashes19 pic.twitter.com/u7Xh6GQYx8

Joff Archer lost all my respect. Laughing when someone was in life and death situation showing what an asshole you are. Get well soon Steve Smith. #Ashes19 pic.twitter.com/PNekfTePxN

Australia currently leads the five matches Test Series by 1-0. Aussie won the 1st Test by 251 runs, where Steve Smith played a match-winning knock of 144 runs and 142 runs in both innings respectively. Meanwhile, the on-going 2nd Test Match is evenly poised and can swing in anyone's favour at any time.

(The above story first appeared on LatestLY on Aug 17, 2019 08:33 PM IST. For more news and updates on politics, world, sports, entertainment and lifestyle, log on to our website latestly.com).