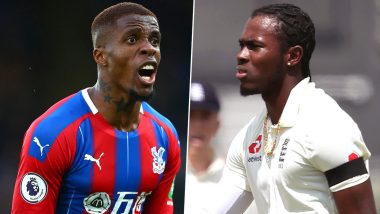 Crystal Palace winger Wilfried Zaha was subjected to racial abuse ahead of his side’s Premier League game against Aston Villa on Sunday (July 12, 2020).  The 27-year-old footballer shared some of the messages by a 12-year-old kid who was a Villa fan, threatening him if he scored against the Brigham side. After Zaha’s post, West Midlands Police said they would look into the abuse and hours later confirmed an arrest. Crystal Palace Footballer Wilfried Zaha Subjected to Online Racial Abuse Ahead of Premier League Game at Aston Villa.

Wilfried Zaha took to twitter to share the messages by the kid, where he could be seen trying to intimidate the footballer by calling him derogatory names and threatening to visit his house ‘as a ghost’ if the 27-year-old found the back of the net against Aston Villa. ‘Woke up to this’ Zaha captioned his post. Jofra Archer Supports Black Lives Matter Campaign, Says ‘Racism Is Not Okay’.

Woke up to this today. pic.twitter.com/Zal0F96htJ

After this incident, cricketer Jofra Archer, who part of the England team who lost against West Indies on the same day, took to Twitter to share a message and hoped that the arrest would be able to stop ‘keyboard warriors’ who hurl racial abuses on social media. ‘Hopefully this will deter the keyboard warriors’ the England pacer tweeted.

Hopefully this will deter the keyboard warriors https://t.co/viHFRueJ0W

The English Premier League resumed from coronavirus suspension on June 17 and since its restart, the competition has been in support of the BLM movement. Players, referees and managers have been taking a knee ahead of the start of each game while in the initial round of matches, names on the back of the jerseys were replaced by the words ‘Black Lives Matter’

(The above story first appeared on LatestLY on Jul 13, 2020 04:49 PM IST. For more news and updates on politics, world, sports, entertainment and lifestyle, log on to our website latestly.com).