English Premier League side Crystal Palace's Wilfried Zaha has been subjected to racial abuse on social media, the forward shared screenshots ahead of Sunday's Premier League game at Aston Villa. 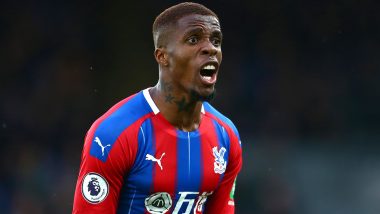 "Woke up to this today," Zaha wrote along with the post on Twitter where he shared the screenshots.

"This is an absolute disgrace and should not be happening. We stand with you, Wilf, and anyone else who has to suffer such horrific abuse," Palace said on Twitter. Tottenham Hotspur vs Arsenal Head-to-Head Record: Ahead of Premier League 2019-20 Clash, Here Are Last Five Match Results of TOT vs ARS Encounters in EPL.

"People like to make these experiences seem like it's not the norm for black people. It's always an outlier. 'Not one of us'. 'Not a real (insert club) fan'," Wright tweeted.

"These are real people and daily experiences. Sooner we accept it the better we can deal with it," he added.

(The above story first appeared on LatestLY on Jul 12, 2020 08:28 PM IST. For more news and updates on politics, world, sports, entertainment and lifestyle, log on to our website latestly.com).