Former Australia all-rounder Shane Watson believes England middle-order batter Jonny Bairstow's century in the drawn fourth Ashes Test at the Sydney Cricket Ground earlier this year was the turning point in his career, and the 32-year-old continues to thrive following that feat. 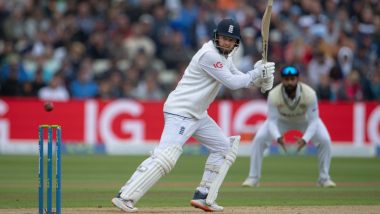 Edgbaston, July 4: Former Australia all-rounder Shane Watson believes England middle-order batter Jonny Bairstow's century in the drawn fourth Ashes Test at the Sydney Cricket Ground earlier this year was the turning point in his career, and the 32-year-old continues to thrive following that feat. Bairstow had then struck 113 in England's first innings, which was crucial in the tourists avoiding a whitewash in the five-Test Ashes series Down Under. Nasser Hussain Says ‘I Have Not Seen Jonny Bairstow Play a Single Reckless Shot of Late’.

Watson hailed the on-field transformation of the veteran batter, saying a cricketer who was often used as a stop-gap arrangement in the England Test setup had finally matured as a red-ball cricketer under new skipper Ben Stokes. "I've always been very impressed with Jonny Bairstow and, initially, it was in the shorter formats (of the game), but that hundred he got at the SCG during the Ashes was brilliant," Watson said in The ICC Review on Monday. "The way he took on the bowlers and his fearless way of batting is exactly what he has shown in the two Test matches against New Zealand. That hundred at Trent Bridge (against New Zealand in the second game) was special, as not many players can do what he did and dominate an international bowling attack in the way he did," opined Watson. Bairstow has emerged as one of England's most dependable players in red-ball cricket, with the right-hander scoring five of his 11 Test centuries in 2022.

Cricket pundits are attributing Bairstow's resurgence to Brendon McCullum taking over as England's head coach and the faith reposed in him by skipper Ben Stokes. "The combination of Ben Stokes and Brendon McCullum...he is always going to let people have that freedom just to be able to take the game on. If that's your natural game, then you just go for it. And that's exactly what Jonny Bairstow has done," said Watson. Jonny Bairstow Reacts After Verbal Exchanges With Virat Kohli, Says 'Part and Parcel of the Game in a Competitive Environment'.

Bairstow has scored two centuries and a total of 394 runs in the three-match Test series against New Zealand, which the hosts won 3-0, and Watson feels there is every reason to believe the England batter will continue to flourish. "He has discovered, across all formats, exactly what works for him and that's just taking on the game, taking on the bowlers and putting pressure on the bowlers from ball one. There's no reason that he can't continue to do this all the way through to the end of his career. He's discovered what works for him... he's found that formula and he's just got to keep repeating that over and over again."

(The above story first appeared on LatestLY on Jul 04, 2022 03:22 PM IST. For more news and updates on politics, world, sports, entertainment and lifestyle, log on to our website latestly.com).