With Jonny Bairstow having scored five centuries this calendar year, former England skipper Nasser Hussain feels the 32-year-old is playing the best cricket of his career right now, adding that he epitomises 'Bazball' -- the term given to new coach Brendon McCullum's positive and aggressive style of play. 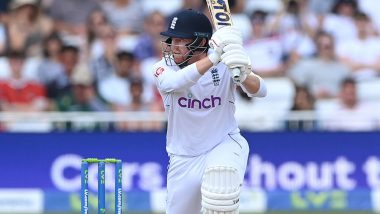 Edgbaston, July 4: With Jonny Bairstow having scored five centuries this calendar year, former England skipper Nasser Hussain feels the 32-year-old is playing the best cricket of his career right now, adding that he epitomises 'Bazball' -- the term given to new coach Brendon McCullum's positive and aggressive style of play. "The saying 'don't mess with form' is often heard in cricket dressing rooms and it means cashing in when you are in nick and remembering all those times when you just could not buy a run. One thing for certain this summer is Jonny Bairstow is not messing with form," opined Hussain in his column for Daily Mail. Jonny Bairstow Reacts After Verbal Exchanges With Virat Kohli, Says 'Part and Parcel of the Game in a Competitive Environment'.

Bairstow has been smashing the ball as well as he has ever done but there was a time when people were questioning his place in the side. With the charismatic cricketer scoring three hundreds in as many Test matches, Hussain said, he is hitting the ball better than he ever has done and epitomises the side's new philosophy. "Now he is going from innings to innings playing the same way and Bairstow epitomises what Ben Stokes and Brendon McCullum are trying to do with this England team. What's Bazball? It's what Jonny Bairstow has been doing. "That's three hundreds in successive Tests now (two against New Zealand), Bairstow adding a high-quality third in this re-arranged last Test against India, and I have not seen him play a single reckless shot in that time. Jonny Bairstow Hits Third Consecutive Hundred in Tests, Achieves Feat During IND vs ENG 5th Test.

There has not been one occasion when I've thought, 'Don't do that Jonny, you're better than that'." The cricketer-turned-commentator said that Bairstow has controlled his instincts and emotions well and added that Virat Kohli poking him on Day 3 of the Edgbaston said only made him more determined to score big runs. Hussain also averred that Bairstow is setting a template for the team to follow. "There will be comparisons with the way Bairstow is playing and the approach of (captain Ben) Stokes but the difference is Jonny is a player and Ben is the captain. Stokes is trying to set the template for his team and send a message to them of how he wants them to play."

(The above story first appeared on LatestLY on Jul 04, 2022 02:18 PM IST. For more news and updates on politics, world, sports, entertainment and lifestyle, log on to our website latestly.com).