Justin Langer, who often refers to the 2001 Ashes Test series as the turning point of his cricketing career revealed how he called over his wife to England to announce his retirement and head back to Australia before one phone call from Steve Waugh changed the course of his career. 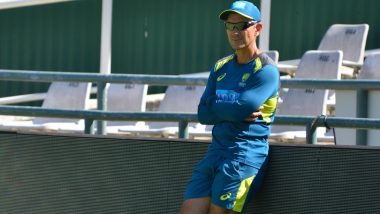 Former Australia cricketer and current head coach of the national team, Justin Langer opened up on his turbulent time with the bat and how Australia’s Ashes tour of England in 2001 could have been last cricketing assignment with the Australia cricket team. Langer, who often refers to the 2001 Ashes Test series as the turning point of his cricketing career revealed how he called over his wife to England to announce his retirement and head back to Australia before one phone call from Steve Waugh changed the course of his career. This Day, That Year: Mike Hussey Scored His First IPL Century for CSK Against KXIP in 2008.

Dropped from the side – following a string of low scores – ahead of the 1st Ashes Test against England, Langer made a shock return to the team in the final Test match of the series and slammed a hundred when opening alongside his long-time future opening partner Matthew Hayden. That match was not only the start of one of Australia’s most productive opening partnership but also the revival of Langer’s career. Langer went to on smashed 16 Test centuries as an opening batsman and averaged over 48. Sunil Gavaskar Lashes Out at Wisden for Excluding Rohit Sharma From Its List of Top Five Cricketers of 2019.

But everything wasn’t as rosy as it became later. Langer had completely lost it when he was dropped early into the campaign and contemplated quitting international cricket.  "I couldn't make a run, I thought I'd failed (and) I'd never play for Australia again. I'd been dropped at the start of the series when I thought I was going to play,” he told Australia broadcaster ABC in its One Plus One show.

Prior to his shock call up for the Oval Test, Langer averaged just 20 from his 11 innings in the England tour. He recalled shouting at Adam Gilchrist after being dismissed cheaply during a tour match in the series. “I hit rock-bottom when I was out for two against Sussex at Hove," he later wrote in his autobiography. "I walked off the ground and shouted at our stand-in captain Adam Gilchrist, 'Look what you guys have done to me!' I really spat the dummy. I was sick of being the easy guy to drop.”

"Literally, the week before I opened for the first time with Haydos (at The Oval), I told all my family I'm getting on a plane and leaving (and) I’m going home," Langer said recalling the time when his life took a sweet turn and he had to never look back. "My wife had flown over because I was going to retire the week before. I was so down in the dumps ... and out of nowhere, Steve Waugh rings me and says; 'you're going to open the batting tomorrow'."

Langer opened alongside Matthew Hayden in the Oval Test and scored 102 not-out, the first of his 16 Test centuries as an opening batsman. It was turning point of his life, said Langer. “It was another great lesson,” he said. “If you just hang in there, you never know what’s around the corner.” Langer went to represent Australia in 105 Test matches and scored 7,696 runs with 23 hundreds and 30 half-centuries and a batting average of 45.27.

(The above story first appeared on LatestLY on Apr 19, 2020 10:03 PM IST. For more news and updates on politics, world, sports, entertainment and lifestyle, log on to our website latestly.com).