Kamlesh Jain, who is currently associated with IPL franchise Kolkata Knight Riders, is in line to be the head physio of the Indian cricket team. 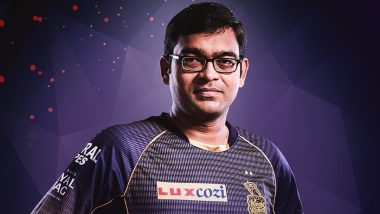 New Delhi, May 17 : Kamlesh Jain, who is currently associated with IPL franchise Kolkata Knight Riders, is in line to be the head physio of the Indian cricket team. The Chennai-based Jain is believed to have impressed head coach Rahul Dravid, BCCI secretary Jay Shah, NCA head VVS Laxman during an interview recently. It has been learnt that Kamlesh has got an oral confirmation by them. And if it's become official, Jain, who has been with the Kolkata based IPL franchise since 2012, will replace Nitin Patel, in the position, a Cricbuzz report said. Sara Tendulkar’s Reaction to Tim David’s Dismissal During MI vs SRH IPL 2022 Goes Viral (See Pics).

Notably, Patel took over as the head of Sports Science and Sports Medicine at the National Cricket Academy (NCA) in Bengaluru earlier this year. Once finalised, Jain is expected to take charge immediately after the ongoing IPL, with the home series against South Africa likely to be his international assignment. He was an assistant physio at KKR under Andrew Leipus for seven years before taking over the head physio role in the last three seasons, since 2020. On the other hand, Yogesh Parmar, who has been with the Indian team along with Nitin Patel, may also remain with the side as the Indian team will be having multiple assignments in different countries simultaneously.

(The above story first appeared on LatestLY on May 18, 2022 11:12 AM IST. For more news and updates on politics, world, sports, entertainment and lifestyle, log on to our website latestly.com).