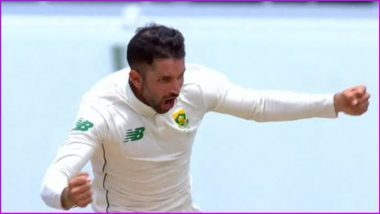 Dubai, May 3: South Africa's Keshav Maharaj, country-mate Simon Harmer and Oman's Jatinder Singh have been nominated for the International Cricket Council (ICC) 'Player-of-the-Month' award for the previous month. Maharaj, the South African left-arm spinner, was in sensational form, emerging as the Proteas' most potent weapon during their two-match home Test series win against Bangladesh. In the first match in Durban, Maharaj bowled economically, holding one end up brilliantly. He returned with figures of 0/65 in 37 overs, going at an economy of 1.80. However, it was in the second innings when Maharaj worked his magic, as Bangladesh chased 274 for victory. Maharaj first scalped two wickets on Day 4 before wreaking havoc on the final day, picking up a further five. Glenn Maxwell Could Still Be in the Test Mix in Sri Lanka, Says Aussie Coach Andrew McDonald.

He ended the innings with figures of 7/32, as South Africa bowled Bangladesh out for 53, and was named the 'Player of the Match' for his efforts. In the second game in Port Elizabeth, he first showcased his ability with the bat, scoring a counter-attacking 84, before returning with figures of 2/57. The second innings again saw him bamboozling the Bangladesh batters with another seven-wicket haul. Maharaj returned with figures of 7/40, as South Africa won the match by 332 runs, bowling the visitors out for 80 and completing a 2-0 series sweep. Maharaj was named both the 'Player of the Match' and the 'Player of the Series'. Kevin Pietersen Compares Virat Kohli To Cristiano Ronaldo, Says the Two Are Legends in Terms of Greatness.

Maharaj's country-mate, Simon Harmer, was also in battling form during the series. Making his international comeback after over six years, he started with a bang, contributing an unbeaten 38 with the bat in the first innings in Durban. He was impressive with the ball as well, registering figures of 4/103 in 40 overs. Harmer then played a brilliant support act to Maharaj in the second innings, as Bangladesh were bowled out for 53. Harmer returned figures of 3/21 to complete a fairy-tale international comeback. Harmer again chipped in both the bat and the ball in the second Test in Port Elizabeth. Scoring 29 in the first innings, Harmer scalped three wickets for 39 in his 10.2 overs. The off-spinner again chipped in with three wickets for 34 runs in his 11.3 overs as South Africa sealed another comprehensive victory.

Oman's opener Jatinder Singh was in sublime form in April, in the tri-series against Scotland and PNG played in Dubai, which was a part of ICC Cricket World Cup League 2. In four matches, Jatinder aggregated 259 runs with three fifty-plus scores, including a century. He started off with a bang against Scotland, scoring 53 as Oman lost a thriller by four runs, chasing down 216. He followed it up with an unbeaten 118 against PNG, as Oman comfortably chased down a target of 225. After a quiet outing against Scotland in Dubai, he found his full range of strokes against PNG again. His 79 helped Oman set their opponents a target of 278, which helped them seal an 85-run victory.

(The above story first appeared on LatestLY on May 03, 2022 04:03 PM IST. For more news and updates on politics, world, sports, entertainment and lifestyle, log on to our website latestly.com).