Former England cricketer Kevin Pietersen has compared former India skipper and Royal Challengers Bangalore stalwart Virat Kohli with Manchester United legend Cristiano Ronaldo in terms of greatness, and added that both are at the top of their game. 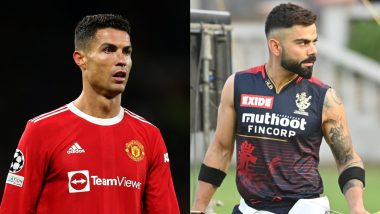 Mumbai, May 3 : Former England cricketer Kevin Pietersen has compared former India skipper and Royal Challengers Bangalore stalwart Virat Kohli with Manchester United legend Cristiano Ronaldo in terms of greatness, and added that both are at the top of their game. Following a prolonged lean patch for RCB in IPL 2022, Kohli finally broke the jinx, scoring 58 off 53 balls against Gujarat Titans on April 30 at the Brabourne. And while the half-century came in a losing cause -- RCB lost by six wickets -- Pietersen felt it was an important juncture for Kohli in his cricketing career, given his lean patch. Ruturaj Gaikwad Believes RCB Skipper Faf Du Plessis Would Be ‘Jealous’ After His Record Partnership With Devon Conway.

Pietersen felt the score could probably become a watershed event in Kohli's career, given his struggles with the bat. "What he (Kohli) needs to do is to have a look at Manchester United and Cristiano Ronaldo. Two similar brands in their different teams and in their sports. You have Virat Kohli right at the top of cricket, his brand is right at the top of cricket. Cristiano Ronaldo is right at the top of football. "One plays for Manchester United, and one plays for RCB and India. Those are big brands and they are going to be talking points. Those big brands also want to maintain their status in the game by winning," said Pietersen on Star Sports. Glenn Maxwell Could Still Be in the Test Mix in Sri Lanka, Says Aussie Coach Andrew McDonald.

"Virat Kohli's greatest attribute, how many games he has won for India while chasing. Virat Kohli is my greatest batter in this country because he has won so many games for India chasing. That is something you look at, that is something he cherishes and is so proud of." Pietersen concluded by saying, "This knock (against Titans), he would be looking and thinking some beautiful shots, absolutely fantastic shots and I felt good. But I know he is a champion, he is a winner and I know that he would be fuming that those weren't enough for the win."

(The above story first appeared on LatestLY on May 03, 2022 12:01 PM IST. For more news and updates on politics, world, sports, entertainment and lifestyle, log on to our website latestly.com).