Sunil Narine, who opened the innings for KKR, smashed quick-fire 50 off 19 balls to set the tone for win. 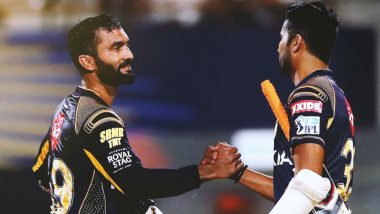 Playing at home Kolkata Knight Riders registered a comprehensive four-wicket win over Royal Challengers Bangalore in the third match of the Indian Premier League 2018 (IPL 2018). KKR chased down the target of 177 in 18.5 overs to open their winning account on the IPL 2018 points table. This was KKR’s sixth win out of nine matches over RCB at the Eden Gardens. Sunil Narine, who opened the innings, smashed quick-fire 50 off 19 balls to set the tone for win. IPL 2018 POINTS TABLE

Despite losing Chris Lynn early, Narine kept playing his shots as he toyed with the RCB bowling attack. The left-hander scored his half-century off just 17 balls and made sure KKR get off to flying start. KKR did lose few wickets, but Nitish Rana (34) and skipper Dinesh Karthik fabricated a 55-run partnership to bring some stability. KKR vs RCB Full Scorecard

Eventually, Knight Riders reached the target with Karthik finishing unbeaten on 35 off 29 balls. The skipper played a sensible innings and made sure his side take the two points on offer.

Earlier, put to bat, RCB lost Quinton de Kock early. However, Brendon McCullum kept going after he was joined by captain Virat Kohli. The former New Zealand skipper was then dismissed on an individual score of 43 off 27 balls. You can watch video highlights of KKR vs RCB here.

After McCullum’s dismissal, AB de Villiers took the centerstage and played some breathtaking shots. He added 64 for the third wicket with Kohli.

With RCB looking set for a big total, Karthik gambled with part-timer Nitish Rana and it paid off. The off-break bowler scalped two big wickets back to back in the 15h over to put breaks on RCBs scoring. He accounted for de Villiers and Kohli’s wickets on consecutive balls. After scalping two big wickets, Rana was taken off the attack.

It was Mandeep Singh who provided RCB with much needed impetus towards the end as he scored 18-ball 37.

KKR now face CSK in an away game at the MA Chidambaram Stadium in Chennai on April 10 while RCB head to home to take on KXIP at the M.Chinnaswamy Stadium in Bengaluru on April 13.

(The above story first appeared on LatestLY on Apr 09, 2018 12:22 AM IST. For more news and updates on politics, world, sports, entertainment and lifestyle, log on to our website latestly.com).