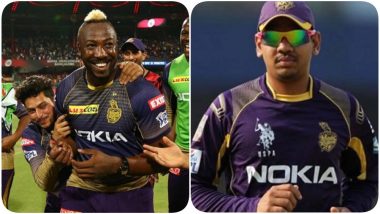 The latest Internet fad ‘I have a joke’ has truly caught the attention of the netizens. After Chennai Super Kings, Shah Rukh Khan and Juhi Chawla owned franchisee has also joined the bandwagon. The official account of KKR went on to share three tweets on social media and went on to praise their players Kuldeep Yadav, Andre Russell and Sunil Narine. Kolkata Knight Riders went on to commend each of these players in their respective departments. Earlier Chennai Super Kings posted a hilarious tweet about their Daddies Army which refuses to cross the age of 30. Chennai Super Kings Joins Social Media Trend ‘I Have a Joke On’, Comes up With a Hilarious Line For Daddies Army.

The franchises are now preparing for the upcoming season of the IPL 2020 which is scheduled to happen on September 19, 2020, in UAE. With the increasing number of cases of coronavirus, the BCCI thought that it would be ideal to conduct the tournament which has a fewer number of cases. UAE also does not have any travel restriction for international passengers thus it makes it easier for the players to travel here. Now, let's have a look at the tweets posted by KKR.

We have a joke on Narine's doosra,

The BCCI will meet the franchises in the upcoming week and will talk about the schedules of the matches. The IPL team owners and the teams have been unofficially asked by the BCCI to leave for UAE by August 20, 2020.

(The above story first appeared on LatestLY on Jul 26, 2020 02:00 PM IST. For more news and updates on politics, world, sports, entertainment and lifestyle, log on to our website latestly.com).